A British Columbia Green Party MLA presented a petition in the legislature Monday on behalf of 16,000 people who want BC Ferries to become part of the ministry of transportation and infrastructure.

The minister responsible, Claire Trevena, says people don't care about the governance of the ferry service as long as it is affordable and accessible.

Adam Olsen disagrees. "The people who live in my riding in Saanich North and the Islands that live on the Gulf Islands would consider BC Ferries part of their highway system, part of their marine infrastructure," he told reporters.

"Yes, the affordability component is important," Olsen said. "I think what we're seeing right now is ferries are not affordable for many British Columbians. Certainly I'm hearing in my riding there's a pretty substantive lack of affordability."

The previous BC Liberal government restructured BC Ferries in 2003, changing it from a Crown corporation to a publicly owned private company. The intention was to move towards having users pay a greater share of costs, which resulted in rapidly rising fares, and to give the corporation more independence from the government.

The Green Party campaigned on bringing BC Ferries back as a Crown corporation, and Olsen said the current model isn't working for ferry users. "The profit driver of the current system that's set up this way is increasing the unsustainability of the ferries."

Jim Abram, a director on the board of the Strathcona Regional District, brought the petition to the legislature. The 16,000 signatures were collected in a little more than a month and are on top of some 24,000 collected on a similar petition to the previous government, he said.

BC Ferries could be managed much more efficiently from within the transportation ministry, he said. "It has a huge management structure. It has a board, it has a commissioner's office, it has a whole bunch of people who don't need to be there if it was in the ministry."

The ministry should run it as an essential service and fund it accordingly, he said. 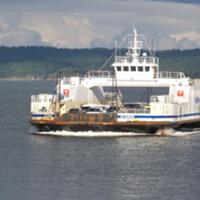 Past missteps, like the construction of the fast ferries in the 1990s, happened when BC Ferries was a Crown corporation, Abram said. "If it's part of the ministry, you don't see a ministry interfering with whether or not a road gets paved or whether or not snow clearing happens."

Minister Trevena said that despite the number of people signing the petition, most people don't care about the governance structure at BC Ferries. "I live on one of the islands," she said. "What I hear very clearly from people using the ferries all the time is they want to make sure it's affordable and accessible, it's following the routes they want, the schedule works for them, and to be honest the governance side isn't something that really motivates people."

She added, "They don't really care where it is housed as long as it's affordable and accessible."

The government is reviewing BC Ferries' operations but not its management structure. Trevena noted that both the budget and throne speeches referred to the system as being part of the province's highway system.