Green Party leader Andrew Weaver says he hopes the NDP government will abandon a campaign promise to give renters grants similar to the ones homeowners have received for years.

“I don’t expect to ever see the renters’ rebate of $400 per renter. It was a gimmick,” Weaver said this week. “We’ve been very straight up with [Finance Minister] Carole James that this is not good policy... We think this is reckless.”

The government is still considering the policy, which the NDP’s platform estimated would cost $265 million a year.

James was unavailable for an interview. In an emailed statement she said, “We are working on a long-term, comprehensive plan to make housing more affordable for people... The renters’ rebate is part of these discussions around our comprehensive housing strategy.”

The NDP promised an annual $400 renters’ rebate during the provincial election campaign last spring. “Homeowners get a break on their property taxes each year,” the party’s platform said. “Renters deserve a break too, especially with the skyrocketing rents we see today.”

The grants are gradually phased out on homes worth more than the threshold, which is reviewed each year and set at a level so that 91 per cent of homes are eligible, according to the government’s website.

Weaver said he could see reviewing the homeowner grant but argued it’s different than the promised renters’ grant. “It’s designed for lower-value houses,” he said. “It’s not there for the much higher homes.”

The renters’ rebate as proposed during the election would be paid to people living in even the most expensive rentals.

“Ultimately, everybody benefits if you have a more enhanced, needs-based rental subsidy program than you would giving wealthy people $400,” Weaver said. “All that’s going to do is jack all the rents up... First year economics say the market absorbs it and prices go up $400.”

The B.C. Non-Profit Housing Association promoted a grant for renters ahead of the election. “If it’s targeted to those who are really in need, it’s a good public policy measure,” managing director Jill Atkey said.

Of the 500,000 renting households in the province, 117,000 are in rentals that are more expensive than they can afford but that are otherwise suitable, Atkey said. A grant could be used to help people afford the units that already exist and that they already live in, she said. “What we’ve recommended is not universal for all renters.”

It’s true that the homeowners’ grant is questionable public policy, she said. “We incentivize home ownership far more than we have anything in place for renters... This [proposed renters’ rebate] does sort of level the playing field.”

It might be politically difficult to eliminate homeowner grants, but the government could begin by no longer increasing the eligibility threshold each year, she said. “I think a lot of homeowners look at that and question whether they really need that $570 contribution from government and could it be spent more wisely.”

Atkey said grants for people who rent would help the recipients as well as landlords, including non-profit organizations dealing with rising operating costs. 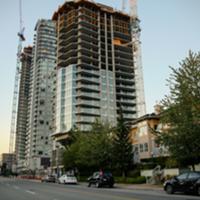 She also pointed out that laws limit how quickly rents can rise. In 2018, the increase is limited to four per cent.

“Renters would still benefit at the end of the day if they’re getting a $400 benefit,” she said.

The government has lots of options for making housing more affordable, Atkey said, whether by raising incomes through policies like an increase to the minimum wage or by directly subsidizing renters.

She said she’s optimistic the province’s February budget will include a strong plan. “We’re anticipating some big announcements in February.”

The NDP, with 41 seats, needs the support of the three Green MLAs to provide a majority in the 87-seat Legislature. The Greens’ “confidence and supply agreement” with the NDP commits the party to support the budget.