The professional group that governs engineers in British Columbia says it is OK for a professional to conduct an environmental review of a project while at the same time negotiating an ownership stake.

The Association of Professional Engineers and Geoscientists of BC (APEG) concluded that Active Earth Engineering was not in a conflict of interest when it prepared environmental studies for a waste dump while discussing plans to share in the project’s profits.

The regulatory body also found Active Earth had disclosed the potential conflict to the ministry official responsible for review.

The government staffer “advised Active Earth Engineering that he was not concerned that it would be improper, from the Ministry of Environment’s perspective, for them to serve as ‘Qualified Professionals’ for the permitting process while at the same time having an ownership interest in the project,” the society investigation noted.

Sonia Furstenau, Green MLA for Cowichan Valley, said she is deeply disturbed by the investigation’s findings. For years she fought the provincial government about the location of the project in a watershed supplying fresh water for 12,000 people.

It’s “astonishing” that the environment ministry now says it knew about Active Earth’s dual role and still allowed the firm to continue with the environmental review, she said, and failed to disclose the potential conflict to the public.

When news of the potential conflict of interest first surfaced in 2015 ministry officials denied knowing anything about Active Earth’s dual role in the project, said Furstenau.

“Either the ministry lied to us or someone has misrepresented the facts to APEG,” charged the MLA.

Furstenau says the finding by the regulatory body “reinforces why we need to reform the professional reliance model in the province” and why she entered politics as a Green MLA.

Professional reliance is a policy adopted by the former BC Liberal government that downloads decision-making previously made by ministry employees to professional engineers, mining experts and foresters employed by private firms.

“The government shouldn’t be handing over their responsibility to professional groups who don’t have a mandate to protect citizens,” Furstenau said.

In the case of Shawnigan Lake, the government accepted the advice of Active Engineering that the quarry sat on sound rock and wouldn’t leak.

Under the professional reliance model, the government discounted evidence presented by independent professionals that warned that the location for the landfill was a bad one due to fractured bedrock.

Engineers with no potential financial stake in the project testified that leaks would contaminate aquifers under the site and thereby pollute the headwaters of a watershed.

The landfill later leaked heavy metals into the watershed.

APEG’s conclusion that there was no conflict of interest contradicts the findings of a Supreme Court judgment that concluded the permitting process for the landfill site had been tainted by “false and misleading” information.

In early 2017, Supreme Court Justice Robert Sewell ruled that the province’s Environmental Appeal Board failed to act fairly when it approved the project.

Sewell found the board relied on a technical assessment report on the project’s environmental impacts prepared by Active Earth Engineering Ltd. But the board didn’t know that Active Earth was negotiating to be a partner in the contaminated waste site, Sewell found. The deal ultimately did not go forward. 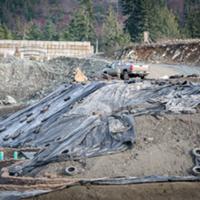 The assessment report “was prepared by engineers who were not independent and who stood to profit from the continued operation of the facility,” Sewell said. “That is a circumstance that goes to the heart of the integrity of the approval process under the Environmental Management Act.”

“Withholding of this information from the board brought the integrity of the approval process and appeal into question,” concluded the judge. “The [technical assessment review] was prepared by persons who were biased in favour of approving the project.”

The APEG ruling says that its investigation found Active Earth disclosed its possible interest in the project to the ministry and that “does not appear to have been available to Mr. Justice Sewell” before making his judgment.

In 2013, the government granted South Island Aggregates and Cobble Hill Holdings the right to fill part of an active quarry with contaminated soil against the wishes of local government and evidence that it would contaminate groundwater.