Off-reserve Indigenous housing providers fear big rent increases, fewer units and even their collapse as long-term subsidies from the federal and provincial government come to an end.

More than 40 per cent of providers say they’re not prepared for the looming end of government operating agreements and associated subsidies, according a study released Tuesday by the Canadian Housing and Renewal Association.

That puts the continued affordability and availability of thousands of housing units in doubt, according to the association’s Indigenous Housing Employment Benchmarking report. The end to the subsidies means agencies could be forced to sell off units to fund repairs or new developments, raise rents or cut back on needed maintenance.

The Indigenous agencies provide housing under a number of different programs, including the Canadian Mortgage and Housing Corporation’s (CMHC) urban native housing and rural and native housing programs, providing everything from below-market rentals and income-based subsidies to home ownership.

Both CMHC off-reserve housing programs were funded through federal mortgage and operating agreements with terms of 25 to 40 years. The agreements funded societies’ management and maintenance costs, and provided subsidies to keep rents below market for more than 10,000 urban Indigenous housing units.

But those agreements are expiring as mortgages are paid off, leaving housing providers with significantly lower budgets.

The report, written for the non-profit housing umbrella group by James Burr of Upper Marlowe Consultants, Inc. and Steve Pomeroy of Focus Consulting, included the results of a survey conducted in March by the CHRA’s Indigenous housing advisory caucus. The caucus sent the survey to 135 off-reserve urban and rural Indigenous housing providers, receiving 51 responses.

Collectively the 51 providers own or operate nearly 9,400 housing units, the majority occupied by Indigenous tenants.

Cariboo Friendship Society of Williams Lake, B.C., which owns and operates 96 housing units, was one of 12 B.C. housing providers to respond.

While subsidies have already expired on 20 of Cariboo’s single family homes, another 13 units got a reprieve from their 2019 expiry last year when the province granted a 10-year subsidy extension.

The society is hoping funding will be extended for another 30 units, as it won’t be able to continue providing housing based on residents’ income without the money, said executive director Rosanna McGregor. Income from market rental units isn’t enough to cover rent subsidies for lower income residents and operating and maintenance costs, she said.

Including Cariboo, 24 providers reported that operating agreements and subsidies had already expired. Half said it was a neutral or even a positive experience, but some providers had to sell units to cover the cost of repairs or to invest in new units.

In all there are approximately 1,100 fewer rent-geared-to-income units today than the surveyed providers had before agreements started expiring in 2000. Some providers have lost up to a quarter of their stock due to disrepair, the survey found.

By 2022 nearly all the providers surveyed will see operating agreements expire. About a third said they’re prepared, 40 per cent say they are not. Another five providers — or 10 per cent — say they won’t survive the end of subsidies.

Cariboo Friendship Society started planning for the loss of subsidies for their 20 single-family homes two years prior to expiration, said McGregor. “We started talking to the tenants, saying, ‘In two years, you know the operating subsidy is going to end and it’s going to turn over to a market rent.’”

“But they’re still well-below what the market is here in Williams Lake,” she said, adding a three-bedroom home now rents at $950 a month, increased from rents geared to tenants’ income.

While some tenants had to move when the subsidy ended, the majority were accommodated in other Cariboo units or under other housing providers, McGregor said. No units of housing were lost.

Larger housing providers sometimes poached talented employees from smaller operations, and are typically located in urban areas where the hiring pool is bigger and more diverse.

There are no targeted workforce training and development funds available for Indigenous housing in Canada, yet more than half the organizations surveyed managed to access employee training in the past three years.

The Canadian Housing and Mortgage Corporation previously provided training, but the responsibility was passed onto the provinces and providers when CMHC devolved off-reserve housing to them in the 1990s.

The results have been mixed. BC Housing, for example, offers free basic maintenance training to provider staff through its SkillsPlus program. But not every province provides training opportunities or funding. 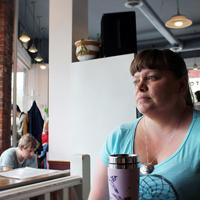 A Foot in the Door: 'Status' Key to Indigenous Housing

The report has recommendations for the CHRA’s Indigenous housing advisory caucus, including working with the federal and provincial governments and non-profits to access employee training and wage subsidies; developing a mentorship program; helping providers plan for the end of agreements; and lobbying provinces for higher income assistance shelter rates to ensure housing remains affordable for the most vulnerable.

While emphasizing the importance of government funding culturally relevant housing for people living in poverty, McGregor would like to see programs that help people transition into home ownership, too.

“I think it’s time to take another transitional step and say, ‘We’re here, we’re not going anywhere. Let us look at how can we integrate more into the communities.’”