[Editor's note: Scroll down to see our interactive map, which shows what various Lower Mainland municipalities allow in terms of “infill.”]

Thanks to a city council decision last month to allow up to three units of housing on a single family residential lot, the city expects more legal secondary suites and coach houses — a term interchangeable with laneway house in North Vancouver — to dot these sizable lots.

“We’ve already legalized secondary suites in duplexes, we were the first municipality in British Columbia to do so,” said Mayor Darrell Mussatto, when he spoke to The Tyee in January.

“Single family homes were basically the last area that really hadn’t taken any density. [The rule change] allows better use of the single family land, whereas multifamily and mixed-use residential areas are already being utilized to a better degree with multiple units [per lot].”

Adding new structures to vacant or unused land in an already developed area, versus building a new subdivision, is what’s known as ‘infill’ in urban planner speak. It’s a kind of “gentle density” that can take many forms, from building in-house secondary suites, to adding laneway homes, town/row houses, duplexes, triplexes, and quadplexes to a single family home lot.

With the housing crisis driving more middle-class would-be homeowners to rent in the Lower Mainland, and the region expecting an additional one million people to arrive by 2040 — a 35 per cent increase in population — more municipalities are jumping on the infill bandwagon.

The Tyee checked what other Lower Mainland municipalities allow in terms of “infill”, and created this interactive map. While infill can include apartment towers, we chose to focus this map on on what some municipalities call “sensitive”, “gentle”, or “ground-oriented” infill, where nothing is higher than stacked townhouses. Click on the map icons to find out more information about that form of infill in the region. 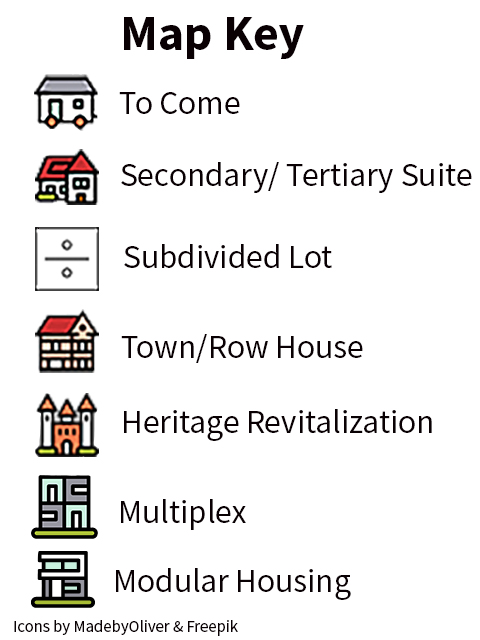 Vancouver already encourages infill housing through its secondary suite and laneway home programs, which allow three and in some areas up to four — units per single family home lot.

Other cities are also encouraging more infill forms. Coquitlam has launched a Housing Choices program, specifically designed to bring new forms of ground-oriented infill housing to residential neighbourhoods. Acceptable forms range from a garden cottage, which is like a laneway house but without a lane access, to four small single-family homes per single family lot.

Not every municipality is on board. Surrey has enough vacant space to keep its urban planning department focused on building new neighbourhoods, though city staff said in an email to The Tyee that pockets of infill are happening even so, while secondary suites make up a substantial proportion of private market rentals.

But as municipalities reach their boundaries and fill in every greenspace not protected as a park or farmland, each will likely take a closer look at infill for providing affordable housing options.