New research shows that, despite industry and government denials, a deadly and durable virus has been causing disease in B.C. salmon farms.

A study supported by the Department of Fisheries and Ocean’s Strategic Salmon Health Initiative has confirmed that heart and skeletal muscle inflammation (HSMI), the third largest killer of farmed fish in Norway, occurs in B.C. and has caused disease at a fish farm in the Discovery Islands between 2011 and 2013 and possibly at three other farms between 2013 and 2014.

The study, with respected federal scientist Kristi Miller among the co-authors, also shed light on the links between piscine reovirus (PRV), common in farmed salmon in B.C., and HSMI.

“We showed that piscine reovirus (PRV) is statistically associated with the development of heart lesions, but also that some fish carry PRV without lesions, especially early in the disease, as has also been reported in Norway,” the study reports.

HSMI was first identified in Norwegian fish farms in 1999 and costly outbreaks have continued to affect its fish farm industry. The disease leads to emaciated, and lethargic farmed fish.

It is just one of many emerging diseases spread by the global expansion of the farmed fish and shrimp industry. Overcrowding and stress invite the emergence of new pathogens.

During an outbreak HMSI can infect the entire population of a typical fish farm (up to 600,000 fish) and kill as many as 20 per cent. The virus is not considered dangerous to humans.

The virus can also infect wild salmon, but researchers still know little about its impacts on native fish.

Norwegian scientists first identified piscine reovirus (PRV) in the hearts of HSMI-affected fish in 2010. Since then, research has suggested a stronger link between the two.

In 2013, biologist and anti-fish farm activist Alexandra Morton published a paper indicating that the virus, found in about 80 per cent of all B.C. farmed fish, likely originated from Norway and was introduced to B.C. waters by the industry.

Provincial government researchers, like fish pathologist Gary Marty, have maintained that PRV, while common in farmed fish, has not been linked with HSMI.

The latest study, which sampled hundreds of live and dying fish at one farm over an 18-month period, explains why other scientists have missed the relationship between PRV and HSMI and how the virus can hide from researchers.

Researchers found that during the early stages of infection, when fish often appear healthy, the virus hides in red blood cells. High levels of PRV did not initially result in heart damage. “We showed that, at very early and late stages of the disease, the linkage between heart and skeletal muscle lesions within individual fish could be relatively weak,” they reported.

The study also found that the first symptoms of HSMI appeared six weeks after the farmed fish were exposed to stressful events: a harmful algal bloom and an ensuing outbreak of mouth rot.

The research also found the disease peaked in fish as levels of the PRV virus declined. The study authors suggests the immune system may clear the virus more quickly than the fish can repair damage caused by HSMI.

The study also offered several reasons why DFO audits failed to diagnose HMSI in a farm where nearly all the fish showed signs of disease.

The audits sampled too few fish, or were conducted at the wrong time, the study concluded.

“At the peak of the disease, a large proportion of fish were affected with severe heart and skeletal muscle lesions, as would be expected,” noted the researchers. But the disease was not evident at the beginning and the end of the outbreak, they found.

“It may be difficult to diagnose HSMI with a high degree of confidence” with the kind of random sampling practiced by DFO, the study reported.

Jeremy Dunn, executive director of the BC Salmon Farmers Association, called the study “important” but added “there is further research ongoing to better understand how HSMI develops and its root cause.” He added that “The single farm identified in the study had an overall healthy population of salmon, which showed normal behaviour and growth rates.”

These new findings could have a significant impact on B.C.’s farmed seafood industry, which has about $500 million in annual sales.

“Either the government will have to change the law or they are going to have admit that they are putting wild fish at risk by allowing the spread of disease in fish farms,” said Morton, a biologist who has long challenged the impacts of fish farming in B.C.

“Viruses are good at what they do. They go viral. The government and the industry are playing with fire.”

Piscine reovirus has been a hot issue for B.C. corporate salmon farms.

In 2013 Ecojustice lawyers, acting on behalf of Morton, sued the department and Marine Harvest after Morton learned that Marine Harvest had transferred young smolts carrying piscine reovirus to an open pen fish farm in Shelter Bay, near Port Hardy. Marine Harvest was operating under a federal aquaculture licence that allowed it to decide whether to transfer fish carrying viruses that could be harmful to wild fish into the ocean.

Federal Court Judge Donald Rennie ruled the federal fisheries minister could not delegate his regulatory responsibility to protect and conserve fish to corporations.

Rennie ruled the fish farm licence conditions “were inconsistent with the law which prohibits the transfer of fish carrying diseases or viruses that may be harmful to the conservation of wild fish.”

Morton hailed the ruling as a victory.

“This was a reckless practice that put wild salmon at risk by exposing them to potentially dangerous disease agents,” Morton said in a statement. “Salmon farms are just nets or cages open to our oceans. To stock them with farmed fish carrying viruses is playing biological roulette.”

The DFO and Marine Harvest appealed the decision. But the DFO abruptly suspended its appeal last spring after Miller announced a potential case of HSMI on a fish farm — an event now confirmed by her peer reviewed study released last week. Marine Harvest and the federal government abandoned their appeals late last year.

Ian Roberts, a spokesman for Marine Harvest, told the Tyee last month that “the judgment does not have a practical impact on the fish transfer process and it has therefore been decided that the appeal is moot.”

The DFO still does not test hatchery fish for PRV before they are introduced to fish farms. Nor has it made HSMI a reportable disease, as is now required in Norway.

As a consequence Morton sued the minister of fisheries and oceans in October for “issuing fish-transfer licences without first considering whether piscine reovirus and Heart and Skeletal Muscle Inflammation (HSMI) are present in the fish proposed for transfer.” 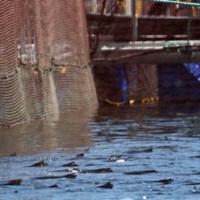 ‘There Is a Dead One There’: Patrolling Fish Farms with Alexandra Morton

The lawsuit notes that Section 56(b) of the fishery regulations “requires that fish to be transferred do not have any disease or disease agent that may be harmful to the conservation and protection of wild fish.”

Marine Harvest has asked to intervene in the case. In recent court documents filed as part of the case, Marine Harvest has acknowledged that PRV has been found in its B.C. hatcheries and said that if the government required it to test all fish for disease prior to introduction into the ocean “it would severely impact Marine Harvest.”

Research scientists warned seven years ago that “measures must be taken to control PRV not only because it threatens domestic salmon production but also due to the potential for transmission to wild salmon populations.”

Norwegian scientists have established that “Salmon aquaculture in open sea cages transfers parasites and diseases from farmed salmon to wild salmonids and vice versa, but little is known about the transfer of pathogens to other fish species.”