The federal government reneged on a promise to close a tax loophole used by rich executives after being pressured by some of Bay Street’s wealthiest big wigs, and critics are demanding to know why the public wasn’t told about those exchanges.

“There are many problems,” NDP finance critic Guy Caron told The Tyee.

The top 100 CE0s in Canada took in an average of $9.5 million dollars in 2015, 193 times what the average person is paid. CEOs and other top executives of big firms can save millions of dollars with the deduction the Liberals promised to change because they take much of their compensation in stocks. Some companies pay in stock at a set price; if that price is lower than market value, the difference is treated as remuneration if the employee sells the stock, but the person can claim a tax deduction for 50 per cent of it.

In 2011 the party platform called it a “disproportionate benefit for the very wealthy” and planned to cap it at $50,000.

One of those who wrote Morneau is former Liberal MP, finance minister and deputy prime minister John Manley, who headed the since-renamed Canadian Council of Chief Executives. It now goes by the name the Business Council of Canada.

“Doubling the tax rate with a retroactive impact on existing options would be unfair,” Manley wrote Nov. 10, 2015. “Allow for a gradual phase-in of the changes.”

Fewer than two weeks later, Morneau announced the changes wouldn’t be retroactive and, according to the Press Progress report, received a thank you letter from Manley. Morneau again wrote back to thank Manley and say he looked forward to working together in the future.

Morneau received other letters from brass at firms like Deloitte and Barclays.

Last March, Morneau told Canadians that closing the loophole was completely off the table, telling media it was “small firms and innovators” concerned about the stock option loophole hurting their business that lead to him take the decision.

The Tyee asked the Department of Finance why the messages from the larger firms were not mentioned by Morneau and received an email reply about strengthening the middle class through broad consultation and pointing out the department gets a wide range of correspondence.

Caron said the revelations show “many problems” and a cynical attitude from the government.

“I think that shows the influence Bay Street has over the Liberal Party,” Caron said. “That’s something we knew in the past and it’s still very much like this nowadays. I think this is a perfect example of this.”

He said the problem isn’t executives writing letters to the finance minister outlining their concerns, but Morneau’s apparent swift response to a request from one of them.

He added that closing the loophole could have easily been implemented to address tax fairness and inequality in the country.

Meanwhile, the group Canadians for Tax Fairness called upon Ottawa to make good on its promise to close the loophole and called out Prime Minister Justin Trudeau over the government’s 180 on the issue. 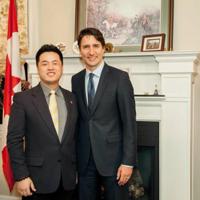 “The prime minister campaigned on a promise to get rid of the stock option loophole which has put billions back into the pockets of wealthy CEOs, including bank presidents, real estate moguls, and heads of powerful multinationals,” said president Dennis Howlett. “Those guys send their lobbyists to talk to the Finance Minister and – just like that – their commitment disappeared.”

The organization said the issue also raises concerns in light of the cash-for-access scandal that has been reported on in recent months.

For a fee of up to $1,525, someone can purchase a ticket to a private dinner with Liberal cabinet ministers and even the Prime Minister.

At first the Liberals insisted lobbying does not take place at the events.

Then, before Christmas, Trudeau admitted he is lobbied at such pay-to-attend events but said it doesn’t affect his decisions.