Thomas Liu, CEO of the LeMine Investment Group, attended the $1,525-per-person dinner at the home of Toronto businessman Benson Wong on May 19. About 35 people attended the fundraiser, which was first revealed by The Tyee.

On Sept. 22, the Canadian government announced an agreement to lift Chinese restrictions on canola seed exports that had threatened access to the $2.6-billion market.

Liu has a background in immigration and condo development in the Toronto area. His company has a subsidiary called LeMine Energy, which claims to trade petroleum products and liquefied natural gas.

Photos of Liu with Trudeau taken at the dinner were posted on the company’s WeChat channel, a Chinese version of Twitter. A $1,500 donation shows up in the Liberals’ quarterly contribution report from a Tong Liu, another name used by Thomas Liu.

On Nov. 8, 2014, Liu signed a deal to export $1 billion worth of canola oil during a Canadian trade mission to China with then-prime minister Stephen Harper.

LeMine also announced the agreement on its website, where the notice still remains.

“LeMine has foreseen the market potential of Canada’s canola oil in China and has a courageous move to put itself on board, which has certainly brought LeMine Group to a promising future of international trading,” reads the company’s statement. “This strategic cooperation will make a great contribution to bilateral trade and economies.” In June 2015 the company released a dramatic promotional video about the deal.

The company did not respond to The Tyee to confirm if it is still in the canola business.

The New Democrat’s Boulerice said it’s troubling when a businessman can pay for access to the prime minister while Ottawa is dealing with a major issue, like the canola trade restrictions, that could affect his business.

“If you want to talk to the government about your interests... you should ask for a meeting with the prime minister or the minister concerned,” Boulerice said. “There is all the appearance of conflict of interest there, the problem that we have is we have no record of the discussions.”

Preferential access to a minister could allow a businessperson an edge over competitors, he said.

Liberal communications director Braeden Caley said in an email that more than 35,000 Canadians contributed to the Liberal Party in the same quarter as the fundraising dinner “in compliance with strict federal political financing rules.”

“It’s important to note that any individuals wishing to discuss government business at a party event are immediately redirected to instead make an appointment with the appropriate office,” he added.

LeMine is mainly known for real estate development in the Toronto area. 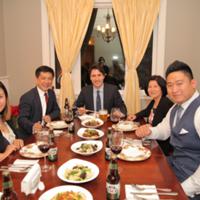 The announcement of the canola deal — tied for the largest signed during Harper’s mission — surprised industry observers who had never heard of Liu or his company.

A Reuters’ report then said the company had not secured canola oil supply and that Liu’s statement that Walmart would be a purchaser of the oil in China could not be confirmed.

LeMine posted the Reuters article on its site, but deleted the reference to the lack of confirmation from Walmart. Photos of Conservative Senator Victor Oh with Liu at the deal’s announcement also appear on the company’s website.

In February, China announced tightened restrictions on canola imports from Canada, allegedly over concerns about the potential spread of blackleg disease to Chinese canola plants.

On Sept. 22, during Chinese Premier Li Keqiang’s visit, the federal government ended the dispute by signing a deal with Beijing to secure Canadian exports of beef and canola to China until 2020.