The introduction of ride-sharing companies like Uber to British Columbia is inevitable, but many details still need to be worked out, the minister responsible said today.

Peter Fassbender, who is minister of community, sport and cultural development and responsible for Translink, made the comment after 81 per cent of delegates to the BC Liberal Party convention voted they want the government to create a legal framework to allow ride-sharing in B.C.

“I think change is inevitable, there’s no question,” Fassbender said in a scrum. “There’s no question in my mind that technology is touching every aspect of our life, and it’s going to continue to do that. We need to have a regime in place that recognizes that change, adapts to it, and is willing to change with it.”

The ride-sharing resolution was the first debated at the convention after delegates voted to put it at the top of the agenda.

The speaker who introduced the motion said Vancouver is the biggest city in North America that lacks a ride-sharing service and that the block has been from provincial policy. “If we’re truly committed to free enterprise, we’ll find a way to get to ‘yes’ on ride sharing,” he said.

Two speakers spoke against the motion. One expressed concerns about safety, while the other said that any change needs to be fair to taxi drivers. 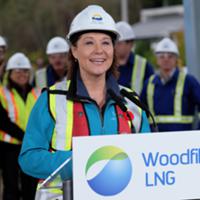 At BC Libs’ Convention, Much Cheer for LNG and Staying ‘Number One’

Asked about the motion passing, Fassbender said, “It reflects what I think the public is saying. They want the ability to have better service and more choice.

“But I think we also heard what I heard in the consultations: make sure it’s a level playing field and make sure I’m protected when I get into any vehicle they have proper insurance, the driver has had the criminal record checks and the kinds of things I expect as a consumer when it comes to protection.”

He also said taxi owners and drivers have advocated to make sure they are treated fairly if there is any change. He noted a recent court decision in the United Kingdom found that Uber drivers are employees and deserve the same benefits and protections that other employees are entitled to.

Fassbender said he recently released a report on consultations about ride-sharing and that Transportation Minister Todd Stone has been looking at what legislative changes may be needed. “We’re doing a lot of things to have the long-term view, as opposed to just saying, ‘okay, let’s open up the field and let’s see what happens,’” he said.

The government will be clear on what direction it is taking on the issue before the May 2017 election, he said. “I think the issue of uncertainty is one we have to deal with, and we are going to deal with it by being clear about what we’re going to do.”

The NDP’s position is very similar to the government’s, said Selina Robinson, the party’s critic for community, sport and cultural development. “We’re calling for pretty much the same thing they’re calling for,” she said. “As long as it’s a level playing field.”

It’s telling that the motion about Uber was the one that BC Liberal delegates voted to debate first when the province faces pressing issues in other areas including child poverty, housing affordability, health care and education, Robinson said.