Another U.S. scientific study has confirmed that methane emissions from oil and gas activity are increasing more rapidly than previously estimated, and that these increases were happening at the same time that the North American shale gas boom and related fracking frenzy took off.

The latest study, one of several major scientific papers on growing global methane emissions published this past year, found that methane venting and leaks from oil and gas activity stabilized in the early 1980s and ‘90s and then dramatically escalated between 2000 and 2008.

“Overall fossil fuel emissions didn’t change a lot until 2000, and then it really ramps up,” reported Andrew Rice, a climate scientist at Portland State University.

Although the timing corresponds with the shale gas and fracking boom, the study did not identify shale gas sources or distinguish emissions from hydraulic fracturing in North America from other fugitive fossil fuel sources.

The increase in methane from the fossil fuel sector identified by the study corresponds with increases in coal mining in China and the fracking of shale gas in the U.S.

The study, published by the Proceedings of the National Academy of Sciences, was based on an analysis of archived air samples from Oregon and other places between 1977 and 2009.

Researchers then used the isotopic fingerprint data on methane from different sources to infer how the sources may have changed total methane levels over time.

“This paper uses the best available science to explain an observation of a complex and befuddling atmospheric phenomenon: why has methane concentration in the atmosphere rapidly increased over the last decade or so?” said Anthony Ingraffea, an engineer and expert on the science of fractures at Cornell University. “The explanation: emissions from natural gas and oil operations.

“This explanation is consistent with other recent cutting-edge science measurement by satellite that shows methane concentrations rapidly increasing in regions of the U.S. with intense shale gas and oil operations,” added Ingraffea.

The U.S. study suggests that conclusions about decreasing fossil fuel emissions based on decreasing levels of global ethane in the atmosphere may be incorrect.

Several years ago, scientists assumed that if ethane levels appeared to be declining as they were in the ‘80s and ‘90s, then methane levels might be doing the same because the two gases are often emitted together, Rice explained.

But new studies have found ethane, just like methane, to be on the global increase too, primarily since 2009.

A 2016 University of Michigan study concluded that the Bakken formation, an oil and gas field in North Dakota and Saskatchewan, was now responsible for two per cent of the globe’s ethane emissions, or much of the globe’s total increase in ethane levels.

Ethane, like methane, can damage air quality and destabilize the climate. Oil and gas wells in the heavily fracked Bakken are now leaking about 250,000 tonnes of ethane into the atmosphere every year.

Methane levels remained stable on the planet at around 600 parts per billion for tens of thousands of years until the advent of the Industrial Revolution.

By 1840, levels had risen to 800 ppb. Today, the odorless and transparent gas has surpassed atmospheric concentrations of 1,800 ppb.

Scientists remain divided about what is driving methane’s worrisome rise. Some blame tropical wetlands, while others point the finger at fugitive emissions from the shale gas industry and other extreme fossil fuel projects.

But an increasing number of recent studies suggest that leaks or fugitive emissions from the fossil fuel industry may be playing a much more disproportionate role in rising methane levels around the globe.

A recent NASA study, for example, confirmed that a methane hotspot over New Mexico and Colorado was largely due to oil and gas activity in the San Juan basin where industry began fracking coal seams in the early 1980s. More than 20,000 oil and gas wells now dot the fabled desert region, a major source of methane for the country.

Shortly after a government-subsidized drilling and fracking boom in coal seams in the 1980s, the region’s residents complained about methane migrating from wells into groundwater, rivers, seeps, outcrops, grasslands and people’s homes.

Now, 30 years later, the NASA study confirmed what thousands of residents have known for decades: that the oil and gas industry dramatically increased and changed methane pathways and leaks throughout the region.

Methane clouds hovering over the region account for nearly 10 per cent of methane leaks from natural gas in the United States alone. 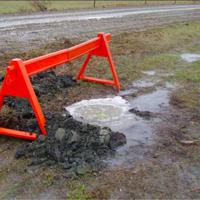 The analysis confirmed “that strong emitters” accounted for more than half of the leaks and “that most of the enhanced methane is related to natural gas extraction as well as coal mining.”

Earlier in the year, a major Harvard study found that U.S. methane emissions had increased 30 per cent over the last decade and that those increases appeared to be concentrated in the south central part of the country, such as Texas and Oklahoma.

Those states also experienced “a nine-fold increase in shale production from 2002 to 2014,” as well as a dramatic increase in seismic activity due to fluid injection from disposal wells or hydraulic fracturing.

It has been well-documented that seismic activity can increase the volume of gas migrating from underground faults, seeps and fractures into the atmosphere.

Using satellite data and surface methane monitors, the study suggested “that increasing U.S. anthropogenic methane emissions could account for up to 30 to 60 per cent of this global increase” in methane emissions over the last decade.

Unlike the NASA study, the Harvard project was not designed to pinpoint specific sources, only specific increases in methane levels. “Better understanding of U.S. anthropogenic methane emissions, particularly those from the livestock and oil and gas sectors, is obviously needed,” said the study’s authors.