The new national director of the New Democrats says he plans to encourage more activist groups to work with the party, and doesn’t believe the controversial Leap Manifesto is a “radical document.”

Fox’s comments signal a likely shift to the left for the federal NDP, one political analyst told The Tyee.

Robert Fox took over the top administrative job in the party this week, coming to the federal NDP after 10 years as the executive director of Oxfam Canada, and said he plans to “do things differently” following the party’s popularity free fall during last year’s election campaign.

“I look at the party and I think it has lots of capacity, lots of depth and lots of ability to make change,” Fox said.

The change will involve holding on to areas where the party excels and trying new approaches elsewhere, he said.

It’s Fox’s first sortie into the political realm and many factors contributed toward his decision to take the job, one of them being what he says is a channelling of disenfranchised members of the public into right-wing causes against their own interests.

After starting out last year’s election campaign ahead after their best fundraising quarter ever netting $4.5 million, the New Democrats lead by Tom Mulcair rapidly started lagging in the polls and lost one million votes and 59 of its 103 seats on election night.

Many analysts and party members blamed a shift to the centre for the election defeat, such as the promise of a balanced budget at a time of economic uncertainty.

Their displeasure was voiced in part by 35 members of the party in Quebec who wrote a letter earlier this year detailing their concerns about the party.

Not long after the letter was published Tom Mulcair lost a leadership review vote, thrusting the party into the position of finding a new leader and some soul searching.

Liberals hampered by ‘smugness’ and ‘hubris’

Fox wouldn’t say much about the Mulcair situation, leaving it up to the party’s election process.

But he thinks the party doesn’t court activist groups robustly, including using their skills and dedication to channel their causes through the party.

Such a move would be the best way to challenge the governing Liberals and the “smugness” and the “hubris” Fox said are their greatest weaknesses.

“We’ve got lots of activists we only really tap into at election time,” Fox said. “We need to ensure that we are supporting them as they take on issues between elections.”

Party donors are also key, he said, because many of them only feel like they hear from the NDP when they want cash.

The party isn’t doing as well financially as last year and has “fewer” resources and staff, according to Fox, but he plans to tackle the problem through issues-based fundraising.

The party must then stake out its turf and take clear positions without being concerned about whether it is trying to be “purist” or “selling principles” to win, Fox said.

He predicts the classic conundrum of moving to the centre for votes or sticking to ideals to push for change will be a sterile argument if proportional representation is adopted and implemented next election. Either way, Fox said, the party will be part of a parliament likely to be more left wing.

A parliamentary shift to the left could help the NDP after it voted to debate the Leap Manifesto across Canada as potential party policy at the same convention at which it ousted Mulcair.

The Leap calls for an increase to education and health-care funding plus a concerted effort to shift away from fossil fuels.

When introduced, the Leap sparked heated debate within the New Democrats, who hope the party’s provincial win in oil-rich Alberta wasn’t a one-off. Analysts said it showed the party was taking on more radical ideas that would cost jobs.

Even British Columbia NDP leader John Horgan distanced his wing of the party from it, saying the Leap doesn’t represent the values of the province.

But Fox doesn’t think the Leap is much of a stretch.

“A lot of the debate on this has been framed by a media who do not in any way share our interests or share our objectives,” Fox said. “(They are) portraying the Leap as a radical document, I don’t see it that way and I don’t think most people in Canada do actually.” 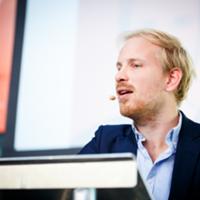 To Win, NDP Must Break with ‘Underdog Socialism’

He wagers about half of the country’s Liberal Party supporters also support the Leap.

University of British Columbia political science professor Maxwell Cameron said Fox’s comments signal he may be preparing to pull the party further to the left of the political spectrum.

Cameron said with Prime Minister Justin Trudeau and the Liberals occupying the centre left of the political spectrum, enhancing relations with activists and not shying away from the Leap Manifesto is logical.

It would enable the New Democrats to hold Trudeau accountable from the left on issues like climate change and pipelines.

“The NDP has to go back to a more left-wing orientation,” he said. “There’s no point in trying to persist at being a centrist party at this point.”

Running a populist campaign from the left worked well for U.S. Democrat Bernie Sanders and Cameron said it could work for the NDP in Canada.

He agreed with Fox that proportional representation could render moot the NDP’s need to argue over its soul.

That’s because, Cameron said, it would rid Canadians of the need to vote strategically to keep out parties they don’t support.

It’s just that kind of situation Fox said he hopes the party can take advantage of over the next three years leading into the 2019 election.

He said he is coming to the party to listen and help create a “space to innovate” where the party can try things and even fail at them with plenty of time to prepare for 2019.

But first, Fox said, the party must put the disappointment of 2015 behind it.

“I have a three-day history in the party, my conversations are all about the future,” he said.