The president of the Canadian Labour Congress says he will continue to push for higher Canada Pension Plan contributions after a modest increase to the program was announced in Vancouver Monday. 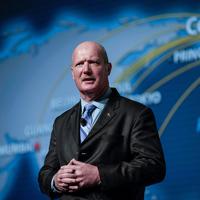 The CLC has been fighting for higher pension contributions and benefits for eight years.

At a meeting of the country's finance ministers, the group agreed in principle to a phased-in expansion of the program resulting in a maximum one-third increase to the annual benefits Canadians will get from the plan when they retire.

The plan will increase the monthly contributions for someone making $55,000 per year by about $7 a month to be matched by employers, according to a release from the province of British Columbia.

The agreement in principle was signed by all provinces except Manitoba and Quebec and if fully implemented won't start until 2019, the year of the next federal election.

Finance ministers sang the deal's praises to reporters, calling it a reasonable plan to improve retirement for Canadians.

Outside of the meeting, CLC president Hassan Yussuff said the changes are a "success" because they expand the pension plan, but the increase isn't enough.

"We will continue to push and of course we will reflect as this campaign comes to a close, and then [think about] how we start another campaign," Yussuff said.

The organization was hoping for a doubling of the payments for the average Canadian from the pension plan which, according to Yussuff, would have meant increasing the pension cheque for retirees from around $560 per month to $1,100.

Yussuff said that pension coverage has been dropping since the 1970s, and such an increase could be achieved for the daily cost of a "cup of coffee and a doughnut."

He said that considering many Canadians don't take advantage of retirement savings plans and live paycheque to paycheque, the current rate is too low and needs the increase.

"No Canadian can live on that on a regular basis to have a decent life," he said.

In February, the Broadbent Institute released a study showing Canadians don't have enough money for a comfortable retirement.

The study found that among those aged 55 to 64, more than 30 per cent had fewer than $1,000 in retirement savings in Canada.

But despite the labour leader's concerns that the increases don't go far enough, Morneau today insisted the plan will help seniors in Canada.

"We believe that what we've come up with is one that will make a meaningful difference in future generations' retirement income," Morneau said. "We know that future generations will look back on this day with a real sense of accomplishment."