The New Democrats are pushing the federal government to decriminalize marijuana with an Opposition Day motion in Ottawa this week. 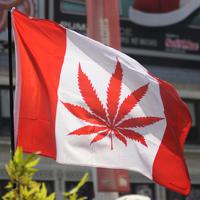 Nine Signs the World's War on Drugs Is Waning

The governing Liberals have promised that marijuana will be legal by next spring, and the motion is meant to prevent Canadians from being prosecuted for pot possession in the meantime.

NDP justice critic Murray Rankin said that if marijuana is slated to be legal next year, continuing to arrest some 60,000 people per year for such offences creates "confusion" in the legal system.

About 22,000 of those arrested will end up with a criminal record, he said.

"It's an injustice, because young people in particular, young adults who have been charged with this offence can get a criminal record," Rankin told reporters in Ottawa Monday.

A criminal record means they can't travel to the United States, and makes their job prospects in a tough economy even more difficult, he said.

Rankin's motion would decriminalize marijuana, but that doesn't mean it would be legal, just not illegal.

Pot use 'a fact of life'

Recently, both Toronto and Vancouver have struggled with marijuana dispensaries popping up in their cities in anticipation of the legalization of pot.

Two weeks ago, Vancouver filed for a court injunction to close 17 marijuana dispensaries in the city after 31 others closed voluntarily because they were operating in areas not zoned for such outlets.

Toronto cracked down on similar operations in the city, executing 43 search warrants in late May.

Such enforcement is a waste of resources and pointless considering that marijuana is expected to be legalized within a year, Rankin said.

But it doesn't appear the NDP motion will have a chance at passing in a Liberal majority government.

Rankin said he agrees with the Liberals' concerns, but added that marijuana use across Canada is a "fact of life."

He said that the government should lift laws allowing for criminal charges for possession and worry about the regulation later, again underlining how the laws are affecting young people in Canada.

"They have difficulty in housing and all of these other things for something that is going to be perfectly legal, the government has told us," he said.