In the years following the introduction of smart meters, BC Hydro disconnected about six times as many customers for not paying their electricity bills as it had previously in British Columbia. 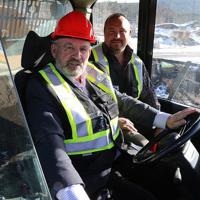 "What we're seeing reflected is Liberal energy policy, which is making things way harder for people," said Adrian Dix, the NDP critic for BC Hydro. "It's because inequality is growing, people are struggling, and hydro rates because of Liberal energy policies have gone up a significant amount."

A table that BC Hydro submitted to the British Columbia Utilities Commission as part of the ongoing rate design process shows that in fiscal 2013, the publicly owned utility issued nearly 12,000 disconnection orders and completed 4,995 of those disconnections.

Two years later in fiscal 2015, BC Hydro issued 38,781 disconnection orders, a three-fold increase, and followed through on a much higher proportion of them. That year, 32,564 households were disconnected, 6.5 times as many as in 2013.

"The number of disconnections completed has increased because we are now able to do them remotely without having to send out a crew," BC Hydro spokesperson Simi Heer said in an email.

"Disconnection is always a last resort and the threshold for sending collection notices or disconnecting power has not changed. We have just been able complete the disconnections more efficiently."

'It's a different ballgame'

Former BCUC commissioner Tony Pullman, now the treasurer at the Together Against Poverty Society, said the change coincided with the introduction of smart meters. BC Hydro spent $1 billion to install 1.8 million smart meters starting in 2012.

"As soon as the smart meters came in, bang, it's a different ballgame," he said.

Records the utility released to the B.C. Public Interest Advocacy Centre in response to a freedom of information request support that analysis. In 2012, when disconnections had to be done manually, the most made in a month was 714.

The first remote disconnections were recorded in March 2013, and by October that year the utility remotely cut the power to 2,873 families.

Before smart meters, disconnections may have been a low priority, especially in the winter, Pullman said. "Most service men didn't want to go out and disconnect people who couldn't pay for their power."

Installing smart meters made it possible for an employee in an office somewhere to cut a household's power with the click of a mouse and none of the human interaction that was previously necessary, he said.

More disconnections isn't what most people expected the smart meter program to deliver, he added.

BC Hydro's Heer said the change has also made it easier for customers to get reconnected and allowed BC Hydro in December to drop the reconnection fee from $125 to $30.

It also saves the utility money by reducing the expense for bad debt and the cost to borrow money to cover delayed payments, she said.

"We do not take disconnection lightly," she said. "Even though disconnections are done remotely, every account undergoes a manual review by a credit agent before a disconnection order is issued."

The NDP's Dix said the increase in the number of disconnection orders is an indication that more people are having a difficult time paying their bills.

"The incremental difference clearly reflects what's happening in the economy," he said. "The [disconnections] don't reflect changes in people's priorities. They represent the challenge of difficult economic times."

That people are struggling is also shown in the numbers for reconnections that BC Hydro included in its BCUC submission, Dix said. While about half of households in 2015 were reconnected the same day they are disconnected, about 15.3 per cent were still without power a week after the disconnection.

That's one out of six people who are unable to respond to have their power reconnected within a week, he said. "You're talking about 6,000 people," he said. "What that tells you is people are really struggling when this happens."

Energy Minister Bill Bennett announced in February that to help B.C. mining companies through tough economic times, firms can defer paying up to 75 per cent of their BC Hydro bills for up to two years.

Dix said the government has failed to make similar allowance for individual ratepayers and noted that NDP leader John Horgan has proposed a "lifeline rate" to help people with low incomes afford their BC Hydro bills as rates rise.