The housing market in British Columbia is broken and making it more affordable will require taking several approaches at the same time, according to a new report from the BC Office of the Canadian Centre for Policy Alternatives. 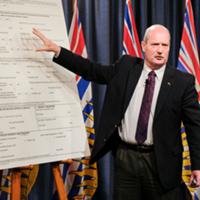 "We're not building the homes that people here need," Marc Lee, a senior economist with the CCPA, said in a phone interview. "We're building the most profitable."

Lee is the author of Getting Serious About Affordable Housing: Towards a Plan for Metro Vancouver, a report released today that looks at the roots of the affordability crisis and calls for various actions to address the problem.

His proposed solutions include building between 5,000 and 10,000 units of affordable housing every year and funding them through increased taxes that cool some of the speculation in the real estate market.

"Most of the recent headlines focus on the spectacular increases in real estate prices," he wrote. "But there is also a serious crisis in the rental housing market, and completely inadequate housing for the most needy."

A crisis with various roots

The housing crisis is driven by various factors, Lee wrote. Population growth, low interest rates and transfers of wealth between generations all play a role. So does money from outside Vancouver and Canada, which Lee says has "led to ripple effects further down the property ladder and in other parts of the region."

The trend in Vancouver is part of a wider context where the super rich are parking their money in a few desirable cities around the world, Lee wrote. "A fundamental problem is that housing is being treated primarily as an investment rather than as a place to live."

One result is a growing gap between the rich and the poor, where the top 20 per cent of households hold about 68 per cent of the net worth of principal residences, he said. And it also means it's harder for renters to purchase homes, so they stay in rental housing longer and push down vacancy rates.

Other challenges he lists in the rental market include loopholes in the province's rent controls, the withdrawal of the federal government from supporting non-market housing, and the diversion of some rental units to Airbnb and other short-term services.

Lee's recommendations start with building up to 10,000 units of affordable housing every year, which would cost an estimated $2.5 billion annually. That would be a significant increase in units, but Lee says it's appropriate considering there are 3,000 people who are homeless in Metro Vancouver and another 145,000 households that spend too great a percentage of their income on housing and are thus considered in "core housing need." It would also begin to address the backlog in need that's arisen from decades of reduced support for affordable housing, he said.

Lee also suggests preserving and re-investing in the affordable housing that already exists, increasing density in the city in "gentler" ways that neighbours may be more likely to welcome, and using zoning to designate as much as 30 per cent of new units as affordable.

Lee advocates making the property tax system more progressive by charging a higher rate, starting at assessed values of $1 million. He'd replace homeowner grants with refundable income tax credits that go to all residents based on their income. And he'd put a ceiling of about $500,000 on the amount of capital gains an owner can realize before having to pay income tax on them.

He would also take steps to stop absentee ownership and speculative investment. "Unrestricted non-resident ownership of local real estate is neither inevitable nor desirable," he wrote. "For the most part, the local real estate market should be limited to those who live and work in the city most of the year."

While immigration is welcome, people shouldn't confuse it with non-resident investment, he says. Switzerland, Australia, the United Kingdom, Singapore and Hong Kong have also wrestled with the problem and have made regulatory and tax changes to address it, he said.

In B.C., he said, the province could use the Property Transfer Tax to a much greater degree, such as by introducing different rates depending on whether buyers are residents of B.C. and whether they will actually live in the property they are buying.

The combined effect, Lee said, of the changes he proposes would be to finance affordable housing out of the gains homeowners are seeing from rising housing prices. "This is central to ensuring greater opportunities for all, in particular the next generation," he wrote.

Lee said on the phone that having bought a home in Vancouver in 2001, he counts himself and his family lucky. "Even at the time things seemed really expensive," he observed, though the value has since skyrocketed. But his 13-year-old daughter is already talking about having to move one day to afford a place to live, he said.

He said he and many others would likely be willing to trade some of the capital gains they've seen on their homes so that their children will be able to afford to stay in the city.

'The challenge is political'

With the next provincial election less than a year away, Lee said he hopes there'll be a public discussion about what governments can do to make the province's housing more affordable.

"To me the challenge is political," he said.

The government has made some tweaks to the Property Transfer Tax, but Finance Minister Michael de Jong has said he welcomes the hot real estate market and doesn't want to do anything to reduce the value of people's properties.

In Lee's assessment, "The Liberals have ceded a lot of ground."

The NDP has talked about using taxes to curb speculation and has been critical of the government's inaction, but so far it's unclear what they would do on affordable housing, he said. "I'm not sure they've really planted those stakes yet."

With the federal government becoming interested in housing again, and with existing expertise at BC Housing, in municipal housing authorities and non-profits, there are many opportunities for partnerships that would make a difference, he said.

But so far it's not happening, Lee said. "I haven't seen anything big and bold," he said. "I think big and bold is the way to go."