Green Party leader Elizabeth May says she's going to pitch in the best she can as a member of the new electoral reform committee announced this week -- starting with demanding changes to the committee structure so that it's more inclusive. 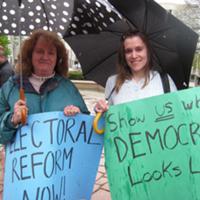 Earlier this week, the federal government announced its plan to strike a committee to examine electoral reform, a campaign promise made by the governing Liberals during last year's election.

The 12-member committee will study potential alternative voting systems for Canada and present a report to cabinet with recommendations by December 2016.

But before the committee can begin its work, the Green leader said, a major flaw in its structure must be fixed.

Currently, only 10 members of the 12-member committee will be able to vote or move motions during committee business.

Those with voting rights include six Liberals, three Conservatives, and one New Democrat. The Green party and the Bloc Qu&eacuteb&eacutecois each have a member on the committee, but they cannot vote.

May insisted that all 12 members should be allowed to vote.

"We're full members of Parliament," she remarked. "There aren't two different classes of MPs -- real MPs and half MPs -- and there shouldn't be two classes of committee members."

Once cabinet decides what new system would work best based on the committee's findings, it will be brought into the House of Commons to be voted on.

Despite cabinet having the final say on what system is chosen, May said she would continue to push for her right to vote in the committee.

She has raised her concerns with Liberal House Leader Dominic LeBlanc and said she's optimistic all 12 members will be allowed to vote.

May would not elaborate on her reasons for optimism.

"I'll keep our private conversations private," she said. "I don't think it's impossible that this could change."

Meanwhile, the Conservative party has staunchly insisted that a referendum be held to determine whether Canadians even want to change the way they vote.

But May said that at about $35 million, the idea is too costly and cumbersome. "I think it's unworkable."

She said that she believes changes to Canadians' rights should never be subject to a referendum.

Conservative leader Rona Ambrose said Wednesday that a referendum would put the decision to change how democracy works into the hands of Canadians.

Ambrose said simply consulting Canadians on the change is "not the same as a referendum."

May responded that historically referendums in provinces keen to change their electoral systems have been quashed by big money ad campaigns, referring to British Columbia's failed attempts in 2005 and 2009.

"I don't want to be outspent and outgunned by the forces that want to keep the status quo," she said.

May said the notion of a referendum is being pushed by the Tories and mainstream media to prevent change from happening.

She said that Canadians should take responsibility and educate each other on why electoral reform is important, to counter big media claims that it's undemocratic to proceed without a referendum.

"If that [idea] begins to catch on, we could see this stalled in the Senate of Canada and the change never made," she said. "The Liberals do not control the Senate."

No matter what new electoral system Canada ultimately chooses, it's likely that the Green Party will get a bigger piece of the parliamentary pie next election.

Under Canada's current electoral system, last election the party received 120,000 fewer votes than the Bloc Qu&eacuteb&eacutecois, but the Bloc won 10 seats compared to the Green Party's one.

May said her party would have done better, but the current first-past-the-post system spooked people out of voting Green in 2015.

"A lot of people held their nose and voted for a candidate in a party they didn't really want, because it was a better option than seeing Harper's Conservatives come back to power," she said.

May insisted her goal on the electoral reform committee is to find the best system for Canada's needs, not on what will help her party.

She added that she isn't in love with any of the established voting system alternatives being batted around, such as ranked balloting or proportional representation.

Instead, May said she has two principles in mind to help create a made-in-Canada system: making every vote count, and ensuring the public feels truly represented by their MP.

"(I support) any system that allow for Canadians to know who their MP is, and that every vote counts," she said. "There is a range of systems in there."