One of the NDP's longest-serving MPs says the party can survive the controversial Leap Manifesto, and is already at work behind closed doors to bridge its recently very public divides. 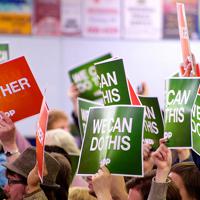 NDP Now Has Chance to End 13 Years of Error

"Suffice it to say I think we really have some good thinking on this and some really good plans, but they have to involve more people than they have so far," said BC MP Nathan Cullen (Skeena-Bulkley Valley).

The manifesto plunged the party into a fierce internal debate at its convention two weeks ago in Edmonton. Its sweeping program calls for increased funding for health care and public transportation, among many other progressive goals.

It also says Canada must stop relying on natural resources for its economy, declaring, "There is no longer an excuse for building new infrastructure projects that lock us into increased extraction decades into the future."

The contention directly challenged the party's Alberta wing, recently its darlings for having toppled the province's Conservative dynasty last year. In government, the party has been wrestling with reluctant neighbours for pipelines to get its oil to tidewater.

Were Leap's pipeline prohibition ever implemented, those NDPers say, its ideals would destroy thousands of jobs in Alberta and elsewhere in Canada.

Alberta Federation of Labour president and former NDP candidate Gil McGowan called the manifesto's orchestrators, who include journalist Avi Lewis and his partner, author Naomi Klein, "downtown Toronto dilettantes," and not in a good way.

McGowan told the CBC there was even talk of the provincial NDP splitting from the federal party over the issue.

Returning to Parliament Hill on Wednesday, Linda Duncan, the party's only Alberta MP, was clearly irritated when journalists pressed her on unity within the NDP.

She stressed that the party had only voted to discuss the manifesto.

"There was not a vote on whether people were for or against what was in that document," she said, adding. "It's a darn good thing because it was a faulty document."

Even prominent progressive professor James Laxer weighed in, insisting that the Leap doesn't represent the interests of the people.

As the dust swirled, Lewis leapt to the document's defence, arguing that in fact it would "bring us together," and accusing critics of "politics" and aiding the interests of the federal Liberals and Alberta opposition Wildrose parties.

But for all the public crossfire, Cullen said that behind closed doors there are people trying to bring the party together.

Cullen said the "heat was turned up" in the days around the convention, and will cool off with time.

To help the party chill, he's been speaking to both Alberta NDPers and pro-pipeline people in the party, and with Leap supporters.

The conversation the party needs "is to respond to that desire to be the unapologetic progressive party that we've always been," Cullen said, "then come to those hot-button topics like pipelines in a way that is respectful."

Cullen didn't expand on how the gap between the two sides could be bridged, pending further engagement with party leadership and other members.

But he hoped for healing, he said, rather than exacerbated divisions, from the upcoming leadership race.

Perplexed by the backlash

Lewis said he thinks it will take more dialogue among party members to resolve things.

"I'm a little perplexed by the level of anger among the Alberta NDP cabinet and leadership," he said, pointing out that Alberta members knew about the manifesto beforehand, and had a chance to address it prior to the convention in Edmonton.

He accused media and the party's opponents of mischaracterizing the Leap Manifesto, choosing to focus just on its fossil fuel ideas while ignoring the rest, and of incorrectly making him and Klein the face of the manifesto, even though it was "literally written by committee," with contributions from many people.

"A political firestorm erupted, where the right and the corporate media saw a terrific opportunity to wound the NDP, and that's what we're actually dealing with," Lewis said. "I and others are waiting fervently, for the moment when we can regain a civil debate about these very tough issues."

And despite the indignation of the party's Alberta wing, Lewis said it was clear that delegates at the convention wanted to discuss the Leap.

"There was a general feeling within the party, the whole party, that this was a healthy debate to have," he said. "For whatever reason the Leap started to represent some sort of new spirit for the NDP that people were interested in discussing."

Lewis said those opposed to the Leap need to consider its other aspects, such as funding for public transportation, to see that it really is a document that progressives could agree on. He noted it includes a call for communities to meet and discuss the document.

Cullen echoed those sentiments. The manifesto's authors and those who support pipelines, he said, have similar values on many other issues.

"No one can argue with me that Naomi Klein is any more progressive than Rachel Notley," Cullen said. "They have different roles: one is the premier of a province and one is a very popular author and thinker."

The NDP's challenge is to find room -- both behind closed doors and in public -- for both.