On a day when the NDP opposition introduced a bill to ban corporate and union donations to political parties in British Columbia, Premier Christy Clark said such a ban is unnecessary thanks to election spending limits and because she represents everyone. 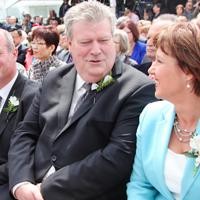 "I represent all of them, and that's what I think about when I'm here every day," Clark said following an announcement at the legislature about the purchase of turbines and generators for the Site C dam that is under construction on the Peace River.

Clark and the BC Liberal Party she leads have been under fire for charging donors as much as $20,000 to attend meals or other events where they will have access to the premier.

Asked about the practice, Clark said, "I don't walk into an event and say, 'How much did people pay to get here?'" Her focus is on listening to people she meets, whether or not they've paid to be there, she said.

Similar concerns in Ontario, along with fundraising quotas for cabinet ministers, led that province's premier, Kathleen Wynne, to announce this week that she will no longer hold private fundraisers that charge for access and that her government will move this spring to ban corporate and union donations to political parties. Such a ban already exists federally and in several other provinces.

'An issue of public trust': Horgan

The current rules in B.C. are sufficient, Clark said. "In British Columbia, we have limits on how much you can spend on election campaigns," she said. "We have full disclosure on what people donate. I'm asking the chief electoral officer to try and make that closer to real time, rather than having the reports come out once a year."

Financial reports released yesterday showed that in 2015 the BC Liberals raised almost $10 million, which was more than triple what the NDP raised and more than 20 times the Green party's fundraising.

NDP platforms in at least the last two elections, both of which they lost to the BC Liberals, have included promises of a ban on corporate and union donations.

On Wednesday, NDP leader John Horgan introduced a private member's bill in the legislature to bring in such a ban and to consider placing a cap on the amount individuals are allowed to donate. Speaking in the legislature, Horgan called it "a bill to take big money out of politics in British Columbia."

People are tired of the perception that money buys attention from politicians, he said. "This is not a partisan issue... This is an issue of public trust and it goes to the heart of our democracy."

Non-government bills are rarely passed in the legislature. An NDP motion to immediately refer the bill to a legislature committee for consideration was defeated by the Liberal majority.

Horgan said this is the fifth time the NDP has introduced a bill to end corporate and union donations. On Monday, independent MLA Vicki Huntington introduced a similar bill, which also set a cap on individual donations at $1,500 a year.

"The BC Liberals voted 'no' to taking big money out of politics," Horgan told reporters. The Liberals are the "party of 'no'" when it comes to reducing the influence of millionaires, he said.

Parties are free to spend as much as they want before the official campaign begins, about 30 days ahead of election day.

The NDP also holds private fundraisers, recently charging $5,000 a person for a breakfast with Horgan in Toronto and $2,000 for a similar event in Vancouver.

"I'm not going to unilaterally disarm," Horgan said. "I'm focused on the 2017 election, and I am going to use the rules that are available to do what I can to make sure that I can discharge as effective a campaign as possible so we can rid British Columbia of a corporate party that is drawn by millionaires."

The NDP received 82 per cent of its donations from individuals last year while the Liberals got 66 percent of its funding from corporations, he said.

Until the rules change, the NDP will take whatever donations it can attract and use them to run as effective a campaign as possible, Horgan said. "I'm trying to compete with the largest corporate political party B.C. has ever seen."