Instead of building the controversial Site C dam on the Peace River, a British Columbia New Democratic Party government would spread jobs around the province by retrofitting buildings and supporting renewable energy projects, party leader John Horgan is announcing today. 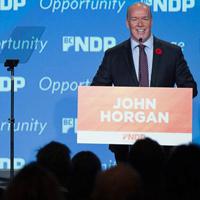 'BC NDP, Strap on Your Tubas!'

The announcement provides more detail on a plan Horgan mentioned during his Nov. 7 speech to the NDP convention. "There are a whole range of options we're going to put forward," Horgan said following that speech.

At an event today at the B.C. Institute of Technology in Burnaby, Horgan was to unveil further details that included energy efficiency retrofits, upgrading existing BC Hydro infrastructure and allowing the Crown corporation to develop its own renewable energy projects.

"Energy efficiency retrofits create twice as many jobs as building a new dam, and the jobs are long-lasting, good-paying, and close to home in every community across British Columbia," said an NDP background document on the plan.

Public buildings including schools and hospitals would be eligible, with the energy-efficiency work done at the same time as seismic upgrades.

The NDP would also use a pay-as-you-save approach to encourage families and businesses to retrofit homes and commercial buildings to make them more energy efficient.

"Energy-efficiency retrofits to private buildings are a win-win-win," according to the background document. "They reduce your energy bills, increase the value of your home, and create good-paying jobs and spur economic activity close to home."

Besides retrofits, the NDP plan includes upgrades for existing BC Hydro facilities, such as building the Revelstoke Unit 6 project that would cost $420 million and add 500 megawatts of capacity.

"Across B.C., many hydroelectric dams are operating '50s-era machinery," according to the NDP. "By upgrading these turbines and transformers with modern high-efficiency technology we can increase output while protecting our farms, protecting our natural environment, and respecting First Nations land title."

The NDP would also like to make B.C. a leader on wind, solar and other renewable energy sources by allowing BC Hydro to develop such projects itself, ending the current practice of requiring the Crown corporation to buy renewable energy from private developers.

Premier Christy Clark and the BC Liberal Party have been portraying Horgan and the NDP as anti-job and anti-development because of their opposition to projects like Site C.

Horgan came out firmly against building Site C in his recent convention speech, though in an interview he allowed that the project might make more sense in 10 or 15 years if the province needs the power. The $9-billion dam project has been controversial since it will flood farmland currently protected in the agricultural land reserve, and local First Nations oppose the project saying it infringes their treaty rights.

"I don't want to say 'no' because we have water in British Columbia and holding that water is an extraordinary advantage, but we don't need it today," he said. "We shouldn't be proceeding with Site C today."

Clark oversimplifies the issue, he said. "She wants to set up arguments about 'yes' and 'no' [on energy projects], and it's just not that simple. I think most thinking people understand that."

Horgan said the NDP energy plan, which will create jobs and power throughout the province, is "more rational" than the current government's approach. The NDP plan will create jobs "not in camps, but in communities," he said.

He would welcome a debate with Clark on the subject anytime, he said.