The federal government should refuse to give a tax break to corporations that donate waste food to charity, says retired University of British Columbia social work professor Graham Riches. 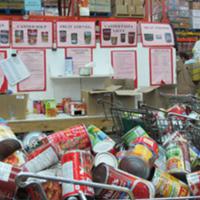 "They're being offered a carrot, when perhaps they should be offered a stick," said Riches, an editor of the book First World Hunger Revisited and a long-time critic of food charity.

Such an incentive would reduce food waste, decrease disposal costs for cities, reduce the environmental impact of surplus food and help people who are hungry, said Malcolm Brodie, the mayor of Richmond and the chair of the National Zero Waste Council.

"I think this truly is a win-win situation," Brodie said. "To me, it's unconscionable to have food that is safe, healthy and edible be discarded. It's not the right approach."

Some 40 per cent of the food produced in Canada gets wasted -- about $31 billion worth of food, and enough of it is edible to provide 300 million meals, according to the council's estimates.*

Brodie said the plan is to bring the issue to the next Federation of Canadian Municipalities meeting in June. The council will also approach federal officials seeking their support, he said.

"It's a solution to both problems that seems like a win-win to both sides, but it's deceptively simple," he said.

Surplus food is the result of overproduction, and helping companies financially when they produce too much is the wrong approach, he said.

"I can't understand how that gives them an incentive to deal with the food waste, particularly if they're receiving a benefit for it," he said.

Nor is increased food charity what people who are hungry need, Riches said. "The people who are poor, what they really need is money in their pockets so they can go into a store and purchase food like anybody else."

That means increasing payments through social assistance or employment insurance so that people can afford to eat, he said.

Considering that many people who are hungry won't visit a food bank, properly funding social services would be a much more universal and efficient way to feed people, he said.

The government's role should be to fulfill the human right to adequate food, not to make it easier to give waste food to people, he said.

Brodie said supporters of the tax incentive are aware of its limitations.

"It is not a full answer to poverty, but it assists," he said. "We have to have other solutions for those who are experiencing poverty and give assistance in other ways."

When asked what those solutions might be, however, Brodie said he didn't have the answers.

He stressed that any donated food would have to be "safe, healthy and edible" to qualify for the tax incentive.

"The amount of such food that we discard here -- anywhere in Canada -- is huge," he said. "With population growth and a scarcity of resources, we have to use the resources we have more wisely."

"Food banks know first hand that they are not the solution to hunger," Ozga said. "Change needs to happen, but we also need to feed the children who are in need today.... It's not by starving those in need today that change will happen overnight."

The roots of hunger include lack of income, unaffordable housing and bad jobs, he said. Some 800,000 unemployed workers don't qualify for employment insurance payments and therefore can't get funding for training, he said.

"I don't see how donating $30 billion of safe, quality food to a food bank lets any government off the hook," he said.

Details are yet to be worked out, but any tax incentive would be too small to encourage companies to produce unneeded food, he said. "It's a small incentive to help the companies that do want to give, and many already do."

Food banks are not the answer to poverty or food security, Ozga added, but from his organization's perspective "any safe, quality food that gets diverted from the landfill to food banks is a good thing."