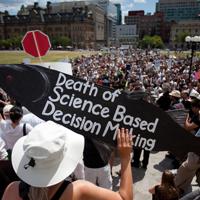 Scientists also detailed for The Tyee how they were told to interact with the media under the previous Conservative government.

The Professional Institute of the Public Service of Canada, which represents workers from a number of government departments in various fields, is holding its annual meeting in downtown Ottawa this weekend.

A spokesperson for the union early Friday said that restrictions around media access to government scientists had been lifted. The change applied to scientists in Environment Canada and the Department of Fisheries and Oceans (DFO), the union said.

Navdeep Bains, the new minister of Innovation, Science, and Economic Development, confirmed in a statement later in the day that "government scientists and experts will be able to speak freely about their work to the media and public.

"We are working to make government science fully available to the public and will ensure that scientific analyses are considered in decision making," he said.

New Brunswick-based DFO biologist and representative of the union to the department Thomas Landry said he was told by higher-ups that if a reporter so much as meets a government scientist at a conference, they can now speak openly.

That is a big difference from a month ago, Landry said.

"In the past, if a reporter would come to me and ask me questions about my research, I would have had to deny the interview and go get the approval from communication [departments] in my region," Landry said.

That triggered a long process that Landry said would sometimes involve government communications staffers telling the scientists to change the nature of their responses or "minimize" information in their research if they were granted permission to speak to reporters.

"Scientists are very passionate about their work so they would like to provide as much information as possible," he said.

The union had intended to demand language that defended scientific integrity in future contracts, and Landry said that should still be carried out to safeguard scientists in future.

The changes follow years of complaints about the Conservative party's tight restrictions on government scientists talking about their work, which is often funded by tax dollars.

The research is referenced when forming public policy, among other uses.

Prime Minister Justin Trudeau promised, if elected, to remove the restrictions of scientists during his campaign.

Lifting 'the shroud of secrecy'

Union president Debi Daviau confirmed Friday that Environment Canada employees were told they can speak to media, and that she believes the openness will spread to other departments as well.

"I do expect across government there will be a lifting of the shroud of secrecy," said Daviau, who could barely contain her smile.

Daviau has been the union president for two years, and said during that time she has never seen anything like what has happened this week.

"We're already seeing signs there's going to be a completely different attitude about sharing public science with Canadians," she said. "These are times I have never seen in my history."

Judith Leblanc, a DFO science advisor from Quebec who also represents the union to the department, said there is great relief that scientists can share the research being used to form government policy with the public.

She said scientists are proud of their work, and feel it is important for it to be available to everyone.

"Today, we felt like there is something changing for this new era and public science, so maybe you'll see more of us," she said. "For our scientists, today was a great day."