The BC Lions pay no rent on the first $9 million of net ticket sales to play at BC Place Stadium, according to their contract with BC Pavilion Corporation that was released under freedom of information on April 21. 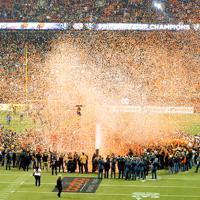 The contract was inked in fall 2011, after the stadium reopened from a $514-million renovation that included a new retractable roof. In 2013-2014, the public-owned stadium reported its latest annual loss, $13.3 million.

The public release ends a nearly four-year quest for the document that went through two inquiries with the Office of the Information and Privacy Commissioner. An adjudicator dismissed both PavCo and the Lions' fears of financial harm, should the contract be released, as speculative.

Lions president Dennis Skulsky declined to give revenue and expense details, but told The Tyee that the club is "in the black" and its payments to PavCo in 2014 for all goods and services totalled just under $700,000. That included rent, food and beverage costs, and the annual fee to use level 3 suites. The contract includes a $200,000 flat fee for suites that the Lions rent or sell to the public, clients and sponsors.

'The Lions' business model got better'

The contract's playoff rent formula is the same as what appears in leaked financial records from 2007, when the Lions paid $147,238 to host the West Final after paying $160,084 rent for the entire schedule of nine regular season games and one preseason game. The Lions reported $7.34 million in net ticket sales when the 2007 rent-free threshold was $6 million and averaged 32,456 attendance for their nine regular season home games. By 2014, the team averaged just over 28,000 at BC Place, which holds 54,500.

Skulsky explained the threshold rose to $9 million in 2011 because "very clearly, the Lions' business model got better."

Under the contract, PavCo retains food and beverage revenue. On game days, the Lions can sell merchandise at their concourse souvenir stands and advertising within the inner bowl. PavCo charges each game-goer a $3 per ticket facility fee, while Ticketmaster levies $6 in fees and service charges per ticket.

"We're not thrilled about that, because that's our customer and they make buying decisions on the total price," Skulsky said.

The Lions' other major source of revenue is a share of the reported $40-million-a-year Bell Media broadcast and internet rights deal with the nine-team league. The club operated under a $5 million salary cap for its 56-player roster last year. The Lions organization hosted the Grey Cup in 2014, which PavCo paid $2.7 million to the CFL for hosting rights. Skulsky said the host committee paid PavCo nearly $400,000 for goods and services, including rent.

Hamilton, Ont. auto parts magnate David Braley bought the Lions in 1997. The Conservative senator from 2010 to 2013 also owns the Toronto Argonauts. Since 2005, Braley has donated $82,750 to the BC Liberals.