Likening it to a failed marriage, Health Minister Terry Lake confirmed April 14 that IBM is no longer leading the development of an $842 million patient records tracking system for three B.C. health authorities. 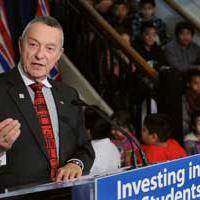 "I don't know of any computer system anywhere that hasn't been a challenge to unveil. The fact is that IBM and the CST project team decided to part ways," Lake said in reply to Darcy.

"This marriage didn't work out, but the children are beautiful," Lake added. "In fact, those children will grow to become a great clinical assistance transformation project."

Outside the legislature, Lake called the record-tracking venture "one of the largest health care projects" in B.C. history. He told reporters it was an "amicable" split with IBM, which had been paid between $70 and $72 million so far. The ministry's communications office later told The Tyee IBM would not be receiving a contract buyout. Lake said the project is nine to 20 months behind schedule. The first rollout phase was delayed from 2015 to 2016 and completion is expected in 2019, instead of 2018.

What do we know about this near-billion dollar project? Records obtained under Freedom of Information law show 117 full-time equivalents are working on it. An August 2014 status update to the Vancouver Coastal Health board described the project as: "Ambitious, challenging, high cost, lots of uncertainty, project (sic) of this type tend to be high risk. Huge upside benefit potential!"

Entries were censored under the headline "Current Snap Shot," except for one line: "Could impact safety and potential adverse patient outcomes."

The documents show some tension between stakeholders. A September 2014 project orientation presentation said: "In a change of this magnitude there will be losses and gains as we progress boldly to improve the system as a whole. These losses represent a change management challenge.

"Our physicians are skeptical and lack confidence in the project. While this is not at all unusual at this stage, it is a concern and needs to be addressed with improved engagement."

The health records project is the latest in the B.C. government's recent history of database troubles.

In 2011, the government discontinued the often-malfunctioning $100 million BCeSIS kindergarten to Grade 12 student records tracking system. In mid-April 2014, ICBC admitted a $110 million billing error that affected 590,000 policy holders, who had been overcharged or undercharged because incorrect vehicle descriptions were moved to a new system that cost $8.9 million.