Canada risks facing the same economic woes as Europe if the federal government does not back away from its zero-deficit idealism, warns a professor at Rhode Island's Brown University. 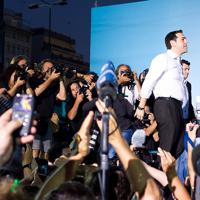 Mark Blyth is an Eastman Professor of political economics at Brown's Watson Institute and an outspoken critic of austerity measures.

Current threats to Canada's economy mean that austerity could push the country into a recession, he said.

Austerity involves cuts to government spending in order to spark private investment, as the government becomes more fiscally stable and doesn't threaten private enterprise with its own investments in projects like infrastructure.

Blyth said the practice simply doesn't work. ''It's beyond stupid,'' he said.

Austerity is meant to improve consumer confidence so everyone ''nips out to Ikea to buy a couch'' and boosts the economy, Blyth said. But it is flawed because it assumes that average people consider government policy when mulling over a purchase.

He said such belt-tightening in Europe has slowed the continent's economy, and by contrast the United States' reluctance to commit to a zero-deficit budget has helped its economy.

''The United States economy grew five times as fast as the European economy last year,'' he said. ''So, if Canada basically wants to become much more like the EU than the United States, keep going.''

Prime Minister Stephen Harper's Conservative government has not delivered a surplus budget since 2007. With an election on the horizon, the government says it is determined to end deficit spending this year.

With the recent drop in oil prices dealing a blow to Canada's resource-dependent economy, and the government's new income-splitting scheme removing more than a billion in tax revenue, reaching zero could require some serious spending freezes.

A recent report by Canada's Parliamentary Budget Officer, an independent oversight body, said the government would have to use a $3-billion contingency reserve to make ends meet and, if oil stabilizes at $48 a barrel, would still be forced to run a deficit of about $400 million to keep services intact.

Despite that, Finance Minister Joe Oliver recently told the Canadian Press a deficit budget would be ''morally wrong'' and refused to back down from his promise to balance the books.

Canadians will have to wait until spring to find out just how frosty the spending freezes must be to meet the zero-deficit mark, because the federal government isn't revealing the budget until April due to the oil plunge. It was supposed to be released this month.

But Blyth maintains the obsession with running a zero-deficit budget has been harmful to western economies, and that politicians use the idea to ''pander to the rich.''

While that may work in an election, he said it doesn't work for the economy. He added there's no proof that avoiding a deficit in tough times does anything to help the country's finances.

''Why do you have to have a zero-deficit target? Why not a three per cent [deficit]? What happens when you hit four per cent? Does your head explode? Do the Klingons invade?'' Blyth asked, ''Where is the evidence these guys have? I have tons of evidence that goes the other way.''

His evidence includes the fiscal shape of Europe, which has been locked into austerity since 2010. The result has been retracting economies, unemployment and suicide rate increases.

Though Canada has a different economy based on resources, Blyth said it would be better off to follow the lead of the U.S.

''They're not spending lots of money, but they're not mindlessly trying to balance the budget either,'' Blyth said. ''Guess what: the debt position's stabilized, and the deficit is the smallest it's been in a decade, because they're growing.''