One of the perks of serving in the Royal Canadian Navy is over: no more subsidized cold ones while at sea. The ban was ordered on Dec. 12 after an internal review of incidents that took place last July in Southern California. The ban does not apply when vessels are docked or there is a special occasion. 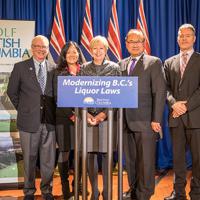 In Political Hot Water? BC Libs Simply Spin the Bottle

The HMCS Whitehorse was withdrawn from an international maritime training exercise last summer because of three incidents of drunkenness and sexual assault in San Diego.* A summary of the internal review does not include any details of the incidents themselves.

Before the ban, off-duty sailors could enjoy a can of beer for as little as $1 out of a converted pop machine. One such machine was visible during a day sail on the HMCS Winnipeg on Aug. 20 for media and local politicians. The navy was showing-off the recently refitted frigate that was in the news when a U.S. fishing trawler rammed it at CFB Esquimalt in April 2013.

Guests were welcomed to the tight confines of the ship's mess where off-duty members of the crew were relaxing and watching a movie. Though in the Strait of Georgia, none of the crew or guests enjoyed a wobbly pop from the machine marked ''Cold Drinks.'' Sales were suspended for the day.

The converted pop machine displayed two rows of beer cans spanning five brands: Lucky Lager, Budweiser, Coors Light, Labatt Blue and Molson Canadian. All were $1 each, except, for reasons unexplained, $2 was displayed as the price for a Lucky's. 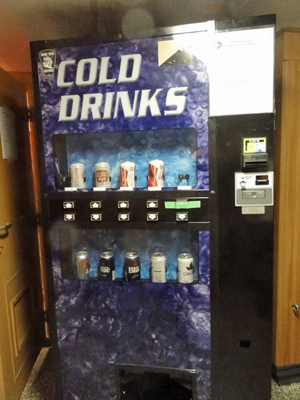 When told the stock was lacking a bona fide, 100 per cent-owned Canadian product or B.C. craft brew, one senior officer nervously laughed.

A six-pack of Lucky retails for $9.35 on shore at B.C. Liquor Stores, which would be $1.56 per can. Bars and restaurants, however, cannot charge less than $3 for a 355-millilitre can of beer, after new minimum prices took effect last summer.

The ban is not the first controversy involving booze and service men and women on the West Coast.

After the 2010 Winter Olympics, the RCMP admitted a dozen Mounties and three officers from Ontario and B.C. forces were ejected from the RCMP-led Vancouver 2010 Integrated Security Unit. Six of the 15 incidents involved allegations of drunkenness or sexual assault.

Police were allowed to imbibe on the three Ballantyne Pier-berthed cruise ships hired for their accommodation during the Games. Canadian Forces members were officially banned from drinking by their commander, Rear Adm. Tyrone Pile.

Pile said in July 2010 that no more than five were fired from Olympic duty for misconduct, mainly for non-criminal, booze-related incidents.

*An original version of this story identified the incorrect ship. Story corrected Dec. 16 at 8:15 a.m.