A new B.C. government website aimed at arming parents with information in the event of a September teacher strike is another tactic for putting pressure on teachers, according to local labour experts. 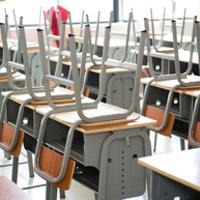 Launched Monday, BCParentInfo.ca compiles all the information the government believes parents need to know in case of a strike, including how and when the promised $40-per-day remuneration for parents of children 12 and under will be paid; the BC Public School Employers' Association's bargaining positions; news releases on other public sector settlements; online learning resources for students; and statistics on student achievement.

"I'd have to go back a long way to remember government putting out that kind of position," said John Fryer, adjunct professor at the University of Victoria's School of Public Administration and former president emeritus of the National Union of Public and General Employees.

The website also blurs the lines between the government's role as the funder of public education and the employers' association's role representing school boards, which actually hire the teachers, he said.

"It's government wearing two hats: as employer and as spokesperson for their own side in this dispute," Fryer said.

Marjorie Cohen, political scientist at Simon Fraser University, agreed, adding it's clear that "government is pulling the strings" in the dispute between teachers and their employer.

"They're pretending that government is different from the employer in one way, and that this employer has the final say on these things. And yet the government is certainly using the strong arm of the government to try to get parents on [its] side," she said.

An Education Ministry spokesperson would not speak to whether the line between the employers' association and government is blurred, saying instead that "it behooves government to make sure parents are getting current and up-to-date information on bargaining."

Little new info, except on $40 offer

What is new are details on the payment of the $40-per-day compensation for parents of children 12 years and under for each day school is closed during a fall strike. Parents will have to apply for the money and won't receive it until after the strike is over.

Both Fryer and Cohen believe this strategy has backfired with parents, a feeling backed up by a poll released last week from Insights West that found parents of public school kids are evenly split on whether the $40 offer is a good idea.

"There has never been this business of an attempt to bribe parents with a payment for the fact that an essential public service is on strike," said Fryer, comparing it to paying hospital patients to stay home.

The idea is unprecedented in North America and his native England, he added. "The $40-a-day basically is saying that our public education system is in fact a provincial childcare policy."

Negotiations between the two parties have lasted 19 months so far, and teachers have been involved in strike activities since April. Normally, Fryer said, the government would have either mandated arbitration or legislated teachers back to work by now, but it seems content to wait it out.

The government might not be winning the public relations battle, but both Cohen and Fryer believe the dispute will settle on terms more favourable to the government than teachers.

Although the two sides have come within a couple of percentage points of each other when it comes to wages, Cohen can't see the government budging on class size and composition issues.

"I think the government really wants to [deal with] that on their own, they don't want the teachers to compel it," she said, "Because they look bad over [class size and composition]. And people know it; they know how hard it is when a teacher has four kids with special needs in their classroom."

Fryer said the teachers are in a difficult position to bargain higher wages partially because other public sector unions have already signed contracts with "me too" clauses.

The clauses mean that if the teachers receive wage increase that's higher than what other unions have accepted, those unions are then entitled to go back to the bargaining table.

"Every major public sector agreement signed has that clause," said Fryer, adding it's a form of indirect pressure on the teachers from their fellow unions.

The Tyee contacted the BC Teachers' Federation for comment on the website but did not receive a response. The government said it would answer questions about the cost of the website on Wednesday.