In the wake of the Mount Polley tailings pond breach that released 10 million cubic metres of water into a creek in B.C.'s Cariboo region, one critic says the mining industry has the "most out-of-touch" emergency response regulations of any resource extraction industry, including oil and gas. 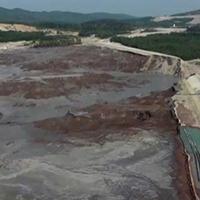 The Risky Rise of the Dams

Amy Crook, executive director of B.C.'s Fair Mining Collaborative, said Imperial Metals Ltd. was likely not required to put aside any money in case of a spill.

She said the provincial government requires mining companies to post reclamation bonds -- money to be used for cleaning up mines before they are shut down. But that money cannot necessarily be used for emergency spill cleanup.

"To my knowledge, there's not a separate bond required by the province to be set aside as a spill response fund," she said, adding that the oil and gas industry is required to post bonds for spills.

Crook said that mining companies do have to train employees to deal with spills that occur on-site, like oil leaks from broken equipment.

But she said there is no provincial requirement that mining companies draft emergency response plans for spills of this size.

"It's a lack of regulation and a lack of will," she said. "This industry seems to be extremely resistant to change, and has enormous political clout."

Crook said the mining industry has been operating under the assumption that spills like the Mount Polley incident can't happen.

Canada's mining industry has a long history of failing to clean up its own messes.

A 2012 report from the University of Victoria's Environmental Law Centre found that the public often ends up paying to clean up mining contamination.

It calculated that taxpayers provided $69 million for cleanup of pollution from B.C.'s Britannia Mine, and almost $400 million to clean up the Giant Mine in the Northwest Territories.

"Human beings make mistakes. Accidents do happen," said Calvin Sandborn, the report's editor. "[Mining companies] should be stocking away adequate money to pay for the cleanup."

The report found that there is an "urgent need to reform" the mining industry's regulatory system. In addition to a requirement that mining companies pay the full cost of spill cleanup, it recommended that the mining industry fund a program to "provide compensation for victims of mine pollution."

But not everyone believes this type of requirement is realistic.

Demanding that companies have enough insurance or bonds to cover the cost of every possible incident could be very onerous, according to Kenneth Green, a director at the Fraser Institute.

Green said Imperial Metals should have to pay for this cleanup, but added that "the bright side is that nature is unbelievably resilient."

'There will be permanent damage'

Still, the apparent lack of emergency response regulations for B.C.'s mining industry stands in contrast with two of B.C.'s five conditions for approval of the Northern Gateway pipeline -- requirements for world-leading oil spill response systems for marine and land-based spills.

Adam Olsen, interim leader of the B.C. Green Party, said British Columbians need to be able to trust that their government is being consistent across the board.

"If we require that pipelines have a world-class spill response plan, then mining should as well," he said.

But some believe that stricter cleanup regulations are not all that is needed.

"This disaster is of a scope and scale that cannot be contained," said Jens Wieting, a campaigner with the B.C. Sierra Club. "There will be permanent damage no matter how quickly people react."

Wieting said to focus on the spill's aftermath is to ignore the most important issue. He believes tailings ponds at other mines could also be at risk of breaching.

"The most urgent step right now is to do everything possible to prevent more accidents of this type," he said.

Wieting said he hopes the government will demand that other mines publish reports on the state of their tailings ponds as a response to the Mount Polley spill.

The Ministry of Energy, Mines and Natural Gas has not yet responded to a request for comment. A spokesperson from Imperial Metals also declined to comment, but wrote in an email that the company is holding a community meeting in Likely, B.C. tonight and will probably begin responding to requests from the media tomorrow.