Fraser Doke never expected to live past his 30s. Diagnosed with HIV in the years doctors called it the death sentence, he didn't think he would experience life as a senior. 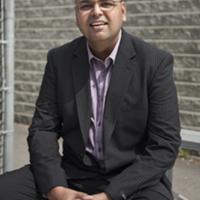 For Gays, Entering Seniors Home Can Mean Going Back in Closet

Now in his 50s, Doke deals with health complications stemming from three decades of HIV medication, plus fear of discrimination in his old age because he is gay.

His mistreatment concerns emerged in 2013 after a nurse at the University of British Columbia hospital asked him to "keep [his private] life not so loud." At the time Doke was recovering from a liver transplant when a visit by a "flamboyant" friend upset older patients in his ward.

Doke has fought hard to live openly. At 13 years old, while his classmates worried about homework, Doke paid weekly visits to the Provincial Lunatic Asylum in Toronto where he received electroshock therapy. His mom believed this was the way to "cure his homosexuality." After a failed suicide attempt, Doke decided to run away. Homeless and alone, he hitchhiked to Vancouver, where he "worked the streets" for 11 years.

With all he's overcome, going back in the closet is simply not an option. "My life is what made me [who I am] today, all the fights I've gone through. I have no shame and no reason to hide," he said.

For over two decades, Doke has lived in a West End housing co-op called The Manhattan. After his surgery last year, he hasn't been able to work, instead receiving government subsidies to pay for rent, food and medication. But it seems every month the budget is getting a little tighter.

"For now I am trying to find a roommate to make things more affordable," he said. "In the future, though, senior housing might be my only option. When that happens I want to know I will be accepted as an equal."

Aging early, out of money

Former city councillor Alan Herbert says Doke's situation is not uncommon. "Many gay men who were diagnosed in the '80s and '90s -- the AIDS generation -- spent all their money on what they thought were the last years of their lives," he said.

Now, decades later, they are older and often struggling with health and money. Years of living with and treating HIV have taken a toll on their bodies, forcing them to confront questions about aging sooner than most.

"There is increasing evidence that HIV-positive people are experiencing early aging," said Dr. Neora Pick, medical director at Oak Tree Clinic and an expert in HIV and aging. This is especially true of patients like Doke, who lived with HIV for many decades and was exposed to older and more toxic medications.

"And because these patients have more co-morbidities [the combination of HIV with other health complications] they are likely to come into contact with health and care services a lot sooner than other individuals," said Dr. Pick.

According to a report by the Canadian AIDS Treatment Information Exchange, in 2008 approximately nine per cent of all individuals living with HIV in the country were 50 and over -- about 5,850 people -- and the number is expected to increase as more efficient treatments continue to extend patients' life expectancies.

There is no data on how many of these individuals over 50 are in fact gay, though the 2008 statistics suggest 51 per cent of all patients living with HIV in Canada were gay men or "men that have sex with other men." What will happen to them as they enter an already overcrowded care system?

Gay and greying together

At least this time Doke is not fighting alone. In 2013 Herbert created Gay & Grey, a discussion group addressing issues that relate to aging as a gay man. The idea came about when Herbert noticed something unusual about HIV support groups in Vancouver.

"Members weren't talking about being HIV-positive anymore. Instead, they were discussing everyday problems, like retirement, housing, loneliness and even other illnesses," he said.

Herbert quickly realized that while HIV was the reason these individuals had come together in the first place, the conversations they were having had no direct relation to it. "After outliving many of their friends, they were having questions about aging -- something many never thought they would get to experience."

"What dawned on me then was: there are a lot of gay men who are not HIV-positive, but who are still subject to the same issues that result from aging. Why not create a safe space for all of them -- HIV-positive and HIV-negative -- to have discussions?"

Since the group opened its door last September, the one issue that keeps coming up every meeting is housing. "Ultimately people want to know: will there be a place for me to live openly when I get older?" said Herbert.

According to Statistics Canada, between 2015 and 2021, the number of seniors in Canada is expected to exceed the number of children aged 14 and younger for the first time ever. While data on the general senior population is easy to find, the number of LGBT seniors is an unknown statistic. In 2003, Canada included the first questions on sexual orientation in the Canadian Community Health Survey, but it only asked individuals aged between 18 and 59.

Even without the official figures, Doke says there are many LGBT baby boomers wondering what their future will be like in a care facility. "Aging can be a stressful experience for anyone, but if you are gay, it might mean bullying. It might mean isolation. It might mean going back into the closet."

For two years Alex Sangha has been working on building Dignity House, an affordable option for low-income lesbian, gay, bisexual and transgender seniors living in Vancouver. The facility would be the first in the city to target the aging LGBT community by addressing what he says are the specific needs of LGBT people.

"It's a known fact that LGBT people have higher rates of substance abuse, depression and suicide. They are more at risk of isolation and loneliness because often times they are estranged from their families, or they haven't had kids."

But even though the project addresses Doke's concerns about living in a care facility, Sangha knows Dignity House is still a long way from becoming a reality. Two years is very little in the world of planning, he said. Up until now Sangha and his team had been conducting needs assessment and feasibility studies.

"The greatest challenge as we move forward will be getting the support of the government and health authorities. We either get the green light, or we keep on waiting in line," he said.

Since last year Haro Park has been training staff on how to care for its LGBT residents. "Every facility has members of the [LGBT] community," said Catherine Kohm, executive director of the institution. "In the end, we want people to be open. We want people to feel free, especially when they are older, to be who they are."

For the most part, however, training caretakers does not guarantee a discrimination-free environment. According to Kohm, older residents often were raised with the mentality that being gay is wrong, and find it hard to accept living next door to an LGBT resident. "At the end of the day, we are a reflection of our community, and while we may be able to train our staff, we can't change people's attitude," she said.

Herbert and Kohm are arranging to have Gay & Grey come to Haro Park one evening, so the group's members can meet and talk to those already living in senior housing. "We are not asking for a different bath or a different sized TV. We are asking for respect and the right to openly be who we are," said Herbert.

As for Doke, he hopes a solution will emerge soon. Last month a doctor told him his carotid artery, connecting his heart to his brain, is working at 15 per cent capacity. This means he might have to move into a care facility before he reaches his 60s. For now, though, he says he's focusing his energy on this housing battle.

"I don't know what's going to happen in the next five or 10 years. What I know is I've been a fighter all my life. Whatever happens, I will continue being a fighter."