A month ago I met Dustin Robinson, a North Island College business student who, like many his age, was struggling to find an affordable place to live in Metro Vancouver. The search came to an end when he and his friends found a tear down for rental on Craigslist. 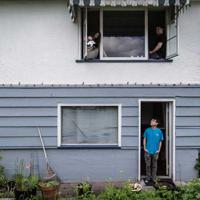 Living in a derelict home haunted by the threat of eviction was far from ideal, Robinson admitted. But the compromises were worth it, especially considering the low rent, which for some tenants was as little as $200 a month.

As it happens, young adults like Robinson aren't the only breed of self-proclaimed "modern day nomads." In a city known for its lack of affordable housing options, families are also experimenting with the tear down lifestyle.

For two years, Ian Patton has lived in a house destined for demolition, along with his wife, two kids and a dog. It all started in 2012, when the family was evicted from their home near Fraser Street. After six months of searching, the Pattons were on the brink of giving up when Ian found a promising, one-line listing on Craigslist: "4 BR house, west side. $1900/mo."

The family soon discovered the secret behind the affordable rent: the property was fated for destruction. From the start, Ian said, the landlord was forthcoming about his reluctance to invest too much in renovations and repairs. Peeling paint and a mossy roof give the house a weathered look. Inside, the hardwood floors and cracked countertops show some wear.

Today, the Pattons pay $1,985 a month for the spacious home in MacKenzie Heights, a neighbourhood known for its million-dollar properties. They've had to come to terms with a month-to-month lease and the ever-present worry of being kicked out.

"It's stressful. It took us a long time to find this," he said. "But for what we're paying we couldn't find anything that matches the positive aspects of this place."

Ian is an academic administrator at the UBC Department of Theatre and Film. As a faculty member, he is eligible for subsidized accommodation on campus. But even that isn't really an affordable option.

"Most of the staff housing doesn't allow pets, and the rents are astronomical even though they are ostensibly 'below market,'" he said.

Despite its flaws, Ian said the MacKenzie Heights house has perks. It has enough room for out of town friends and family to stay, a wood-burning fireplace, a fenced yard and a huge unfinished basement for storage and play area.

"I don't know if [living in a demolition home] is viable for others, but it is sort of the only option out there if you have more than one kid," he said.

The administrator believes excessive regulations are partly to blame. "The City makes it very difficult for owners to renovate older homes, so the only viable option on million-dollar lots is to tear down and build a new house with maximum square footage plus a basement suite and laneway house."

Owners looking to make renovations, install new plumbing, electrical or gas lines, or move existing walls need to apply for permits -- just as if they'd opted to bring down an entire house. If a property is old and in need of several repairs, demolition and re-development could be more cost-effective and profitable in the long-run.

"If you're an owner, any money you sink into an older home won't see a return because [eventually] it's going to be bulldozed anyway. So, in essence, any renter in an older house is living in a tear down," Ian said.

"There are a lot of people purchasing property in the region with the idea of bringing it down," she said. "Often, it's families that end up living in these homes."

Earlier in April, the Mander Group rented a five-bedroom tear down in West Vancouver to one such a family. The tenants signed a one-year rental agreement, securing a new home for at least 12 months.

That is four times what Dustin Robinson and his friends were able to secure with their lease. Three months was all their landlord needed to obtain a demolition permit and start tearing the property apart.

The Pattons' story is a little different. Ian and his wife have never met the man who'll decide when their four-bedroom rented home will be demolished. The owner lives thousands of miles away, in Hong Kong, and hasn't yet decided what will happen with the land once the house comes down. For now, the family lives in limbo.

The situation highlights a concern many Vancouver residents have about overseas investors buying up real estate, demolishing homes and building condo towers -- ultimately making housing less affordable in the city.

Mander said there are foreign buyers, but stresses that's not the case for all tear down owners. She said a year is a reasonable period for any type of investor, overseas or otherwise, to deal with all the paperwork required for demolition, like formulating building plans and getting permits.

Ian argues young families, like his, should take advantage of older homes and maximize their use before they disappear.

"There's a house similar to ours on our street that is just sitting empty. I'd rather see families living in these older houses than abandoned altogether," he said. "Once they're replaced with a new house, they're no longer available as rentals."

While the Pattons are fine with renting, they admit it would be nice to see some stable and decent family rentals in Vancouver, though they don't expect things to change anytime soon.

"We can't afford to rent or buy new, and basement suites and laneway housing are not a solution for our family. So, we're quite happy to live in semi-dereliction," Ian joked.