A federal decision allowing commercial fishermen to catch five times the usual amount of endangered coho salmon this year should not be a cause for alarm, said Dr. Brian Riddell, president and CEO of the Pacific Salmon Foundation, a non-governmental organization working to conserve salmon. 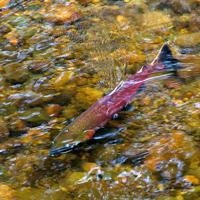 In fact, he said, the sacrifice could be for the greater good -- so long as Fisheries and Oceans Canada (DFO) can guarantee that fishermen won't go above the limit.

Riddell's opinion goes against the stream of conservationists who were quick to condemn DFO's decision to increase the coho bycatch rate in the wake of this year's expectation of a colossal sockeye return.

Sockeye and coho swim together in areas open to commercial fishing, which puts coho at risk of getting caught as bycatch in the net with the sockeye. Until this year, fishers were only permitted to keep three per cent of the bycatch. That increases to 16 per cent this year.

"There's very, very little reason for concern," said Riddell, who retired from the position of research manager and head of stock assessment for Pacific salmon with DFO in 2009.

While it's unquestionable that the Interior Fraser coho will suffer because of the increase, he said it's nothing the endangered species can't sustain. It would only be for a year, he added, since coho and sockeye runs only overlap every 12 years.

The resilience of the coho will come down to proper management of the fisheries, said Riddell, stressing that DFO must ensure that commercial fishermen won't take more of the fish than allowed.

DFO has been accused of giving in to commercial fishermen who hold an interest in this year's huge sockeye run. Expectations of the return range from 23 million to as high as 70 million fish. Increasing the bycatch rate for coho allows commercial fishermen to catch more sockeye, because they don't have to worry so much about what's in their nets.

But the decision is not purely to increase profits, said Riddell, who argued that the enormous amount of sockeye could in fact necessitate increased fishing.

If 70 million fish were indeed to return, which Riddell highly doubted, almost all of them would head for their spawning grounds in Adams River and Shuswap Lake.

"Those places can only hold so many fish," he said. "There are risks to putting that sort of abundance into a system."

Risks include reduced spawning and the threat of disease outbreak, which could harm other salmon species like the coho, said Riddell, adding that there's a long history of outbreaks when salmon are abundant on the Fraser River.

"That's what we're up against this year," he said. "The bycatch then becomes the limiting factor."

That's not an opinion shared by Dr. Patricia Gallaugher, director of the Centre for Coastal Science and Management at Simon Fraser University.

Gallaugher is renowned for her work with salmon conservation in B.C., and said DFO's decision to quintuple the allowed bycatch of coho "didn't make sense" as it would impair the coho's recovery -- which has only just started showing signs of improvement in the past three years.

Gallaugher said DFO was in conflict with the Wild Salmon Policy, which mandates the federal department to protect and recover weak stocks such as the coho, which she called "extremely vulnerable."

Riddell, the lead scientist who created the policy in 2006, disagreed. Under the policy, he said DFO is obligated to keep coho stocks above a minimum of 20,000 fish, where conservation becomes a serious issue. With an expected return of 50,000 this year, coho would still be above that limit even with the increased bycatch, he said.

"So unless [the return] is going to be completely reverse of what people expect, we're really not at odds with the policy at all," Riddell said.

So long as DFO is able to monitor the fisheries and maintain the bycatch at 16 per cent, he added, it should be fine. "You don't want to find out post season that the bycatch turns out to be 50 or 60 per cent."

The Tyee asked DFO about how it plans to keep the bycatch at 16 per cent or below, but the department could not provide the information by publication time.

Randy Nelson, former director of DFO's Conservation and Protection branch in the Pacific region, said he had little faith that the monitoring would be done "effectively, properly, and accurately."

He said the department didn't have the funds, with both enforcement officers and resource management stretched thin.

Nelson said proper monitoring would require around-the-clock presence of independent contractors with no vested interest in the fishery, but that was unlikely to happen.

If fishermen were left to themselves, he had no doubt about what would happen.

"The majority of fishermen are law-abiding, but the incentive far outweighs the risk," said Nelson. If a small group started "getting rid" of coho by not reporting them or selling them on the side, then it wouldn't be long before "everybody starts doing it."

Fishermen have a multimillion dollar operation, and if they underreport the coho they're going to make more money and continue to fish, he said.

"It's a pretty tough thing to ask people to do without a little supervision."