Fisheries and Oceans Canada is allowing commercial fishermen to catch five times as many endangered coho salmon in anticipation of this year's massive sockeye run on the Fraser River. 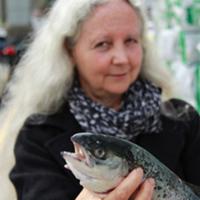 Conservationists are outraged with the federal decision, which they say will further threaten the coho species in the rush to allow fishermen a greater catch during the annual sockeye return. This year's return is expected to be tremendous, as high as 70 million fish.

Sockeye and coho swim together in the areas open to commercial fishing, which means coho are at risk of getting caught in the net along with the sockeye.

The government has tried to protect coho by limiting the unintentional bycatch to three per cent since 1998. Canada's new plan quintuples that and will allow for 16 per cent bycatch.

A spokesperson for Fisheries and Oceans Canada, known as DFO, said in an email that coho stocks were returning and could sustain the increased catch, but that claim was met with skepticism from conservationists.

"It's confusing," said Gord Sterritt, executive director of the Upper Fraser Fisheries Conservation Alliance. "What's basically happening is that DFO is allowing open season on an endangered salmon that has not yet been declared recovered."

Interior Fraser coho was put on the federal list of endangered species in 2002 after stocks decreased at an alarming rate because of overfishing in the 1990s.

Only in the past three years have coho stocks begun showing signs of recovery. According to DFO's 2014 forecast, about 50,000 of the endangered salmon will return, which exceed the department's long-term recovery goal of 40,000.

Sterritt, who is also the fisheries resource manager for the Northern Shuswap Tribal Council, said three years was too little recovery time to go on. "We need more data," he said. "We could be in a position where we're driving these stocks down again."

Aaron Hill, a biologist with Watershed Watch Salmon Society, said that the federal decision was "very short sighted" and delaying the species' recovery.

Hill said coho catches could be significantly decreased by moving the fisheries off the coast and in-river where the two species separate. In-river fisheries are historically run by First Nations.

Dr. Patricia Gallaugher, director of the Centre for Coastal Science and Management at Simon Fraser University, is renowned for her work and research with salmon conservation in B.C.

She said coho was an "extremely vulnerable" species that DFO was mandated to protect and recover under the federal Wild Salmon Policy.

The increase of the bycatch rate seems to be in direct conflict with that mandate, said Gallaugher. According to DFO, the most recent generation of coho averaged 36,000 fish.

Even if this year's returns were to reach 50,000, the scientist finds a fivefold bycatch rate "highly surprising" as it would also imply a fivefold increase in returns, she said.

Bycatch can be prevented

Both Gallaugher and Hill said this year's massive salmon run is only due to a few strong sockeye populations. Many other populations are still doing poorly or are classified as endangered.

Like the coho, such populations would also be hurt by this year's intensive fishing.

Gallaugher said fishermen could avoid or manage bycatch of endangered salmon by using special gear or placing them in recovery boxes from which they could be released into the ocean.

"But all of that takes time, and if you're rushing to get as many fish as you can then it's not going to happen," she said.

It would also require a strong DFO presence to ensure enforcement, and Gallaugher doubts the department has the capacity.