With the school year coming to a close in less than three weeks, British Columbian teachers are busy cramming remaining curriculum into dwindling class hours, preparing students for exams, and writing report cards. In addition, this year they're involved in job action and a subsequent employer lockout that cuts down on class, marking, and student support time. 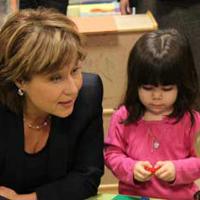 Which MLAs Send Kids to Private Schools? We Asked

So when they vote in overwhelming numbers for their union to call for a province-wide strike, potentially putting their students' academic futures at risk, it's serious.

BC Teachers' Federation members did just that this week. Over 80 per cent of union members, or 33,387 teachers, cast votes, which BCTF President Jim Iker called "one of the highest turnouts we've ever had in [union] history." In total, 86 per cent voted in favour of walking out of schools to strike.

Almost as many teachers voted in favour of this strike as bothered to vote at all during the union's initial three-phase strike vote in March.

"With this vote, B.C. teachers have sent a very strong message to Christy Clark and her government: it's time to negotiate in good faith and put new funding on the table and to reach a fair deal with teachers that also provides better supports for our students," said Iker.

But while the vote passed, the strike is not a done deal. Iker said the union plans to continue with this week's rotating walkouts, with teachers in 22 of the province's 60 districts walking out today. The union will continue meeting its employer at the bargaining table.

During a press conference last night, Iker told reporters teachers could walkout as early as Monday, June 16, 10 days before schools close for the summer. But the teachers must give three days notice before walking out, and Iker said union brass will discuss next steps before making any decisions, promising to make them public as soon as possible.

The union is more interested in reaching a deal than striking, however.

"It's always about trying to put pressure on the government, putting minimal pressure on our parents and students. That's why we went with the different levels of action that we have," said Iker.

"So far this government has come to the table empty-handed. It's time to change that."

In a press release issued by the Ministry of Education soon after the teachers' press conference, Minister Peter Fassbender echoed Iker's message on teachers' reluctance to strike.

"The vote results are not unexpected. While the [union] leadership received the mandate they sought, no one should interpret this as any kind of enthusiasm on the part of teachers to shut down schools," read the statement.

"I know teachers would prefer to be in their classrooms and I know that students and parents would rather finish this school year on a positive note. It is now up to the [union] leadership to decide if they are going to move to a full walkout."

Fassbender noted the five days of bargaining left until June 16 was the same amount of time it took to bargain a deal with Canadian Union of Public Employees education support workers last week: "They did not need to strike to get a fair deal, and neither do teachers," he said. Teachers and their employers, however, have been bargaining since February 2013.

The union said last week the comparison isn't relevant because there is no class size and composition element to the support workers deal.

Both the union and its employer remain far apart on teacher wages, class size and composition, and the reinstatement of teacher-to-student ratios for specialist teachers like teacher librarians and counsellors.

The union wants a four-year contract with a salary increase of 9.75 per cent plus a 2.25 cost of living increase. The BC Public School Employers' Association counters with a six-year deal with a 7.25 per cent salary increase, plus a $1,200 signing bonus if a deal is reached before June 30.

The B.C. Supreme Court has ruled twice the contract stripping was unconstitutional and ordered the government to allow teachers to negotiate working conditions like class size and composition. The employers' association says it is doing just that, but the teachers disagree.

"We need government to make a commitment to bring the funding to the bargaining table so we can get that deal, get that deal now in the next few days," said Iker, adding the teachers' 2006 deal was made when more funding was brought to the table, and the provincial government found more funding to end the Port of Metro Vancouver trucker strike in March.

Labour Board ruling expected this week

The Labour Relations Board will determine how much teachers can walk away from in a province-wide strike when it rules later this week on whether provincial exams should be considered essential services.

The employers' association appealed to the board last Friday, June 6, to make the following tasks mandatory in the event of a full strike: preparing, monitoring, and grading of exams essential to completing Grades 10-12; reporting exam marks to government; duties for any new or ongoing special needs designations; payroll duties; and any health and safety responsibilities teachers may have at the school.

Iker told media he was unaware of when the board's decision would be announced, but noted the employers' association expressed disappointment when the teachers went to the board to seek an essential services ruling prior to their March 6 strike vote.

"Now they're using essential services as a way to… limit the right to strike," he said, adding the ongoing lockout by the employer is "causing a lot of chaos and confusion."

Currently teachers are not allowed in schools until 45 minutes before or after class time, nor are they allowed to work during the lunch hour, in addition to a 10 per cent pay cut. The Tyee has heard reports of teachers sitting outside schools during lunch in order to respect the lockout.

Michael Marchbank, public administrator for the employers' association, sent a letter to Iker yesterday to advise the ongoing lockout would not apply to summer school teachers.

Although the union is bargaining directly with the employers' association, Iker continues to call on Premier Christy Clark to "show good faith" at the bargaining table by providing more funding. He also noted the union wants to repair its rocky relationship with the government, saying he has been trying to meet with Clark but "she's declined."