Two days after thousands protested against the Enbridge Northern Gateway pipeline in Vancouver and other B.C. communities, opponents of the project have found an ally in the the United Nations Indigenous rights envoy. 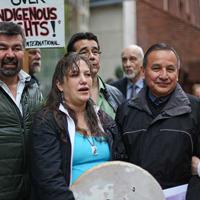 Half of them are in B.C. At the very top of his list is Northern Gateway.

"Indigenous representatives made the Special Rapporteur aware of a number of proposed or implemented development projects that they feel pose great risks to their communities and about which they feel their concerns have not been adequately heard, or addressed," he wrote. His list of problematic projects also included Kinder Morgan's TransMountain pipeline expansion, BC Hydro's Site C Dam, Alberta's oilsands developments, and liquified natural gas drilling and pipelines in northeastern B.C.

"Resources are in many cases targeted for extraction and development by non-indigenous interests," he concluded. "While indigenous peoples potentially have much to gain from resource development within their territories, they also face the highest risks to their health, economy, and cultural identity from any associated environmental degradation."

He added that many First Nations' efforts to protect their territories and "long-term interests" are at odds with not only the efforts of corporations, but the "backing of the federal and provincial governments… to move forward with natural resource projects."

On May 10, several thousand people rallied on the shores at Vancouver's Sunset Beach for the largest protest yet against Enbridge's proposed $7.9-billion, 1,177 km pipeline from Alberta's oilsands to a tanker terminal in Kitimat.

The company hopes to ship 200 million barrels of diluted bitumen a year, but concern over the risk of oil tanker spills and pipeline ruptures has sharply divided B.C. public opinion and galvanized a wall of First Nations opposition.

Premier Christy Clark continues to withhold formal support for the project, for which she declared five conditions must be met in 2012. They include improved marine and land spill systems, the addressing of aboriginal concerns, B.C. receiving a “fair share” of economic benefits, and the completion of an environmental review process. (The National Energy Board conditionally approved the pipeline last year after its review ended).

The executive director of Coastal First Nations, an alliance representing nine indigenous communities on the central and north B.C. coast and Haida Gwaii, told the large ocean-side crowd that several B.C. nations are close to launching court challenges against Northern Gateway, following such a challenge of Kinder Morgan's pipeline by Tsleil-Waututh Nation earlier this month.

"Coastal First Nations, Tsleil-Waututh, Haida, Heiltsuk, Haisla -- all these nations including the Carrier Sekani -- are going to be taking Stephen Harper and Northern Gateway to court," Art Sterritt said. "They've gutted every bit of legislation that was in the way of these pipes."

He warned that if Northern Gateway is approved when the federal government announces its decision, expected this June, an accident could replicate the longterm damage from the 1989 Exxon Valdez tanker spill, the 2010 Gulf of Mexico offshore spill, and Enbridge's pipeline rupture into the Kalamazoo River, Michigan the same year.

"With what we've seen Enbridge do in the Kalamazoo, the Coastal First Nations declared a ban on tankers in the Great Bear Sea," Sterritt told the crowd. "That ban will stay in effect forever. No good can come of this project."

Anaya linked resource development by non-aboriginal companies to the "distressing socio-economic conditions" experienced by some aboriginal communities in Canada, including substandard housing, poverty, mass imprisonment and violence against women -- a "crisis," he wrote, which has caused "ongoing human rights concerns" for the UN.

"One of the most dramatic contradictions indigenous peoples in Canada face is that so many live in abysmal conditions on traditional territories that are full of valuable and plentiful natural resources," he wrote.

Natural Resources Canada would not comment on several resource development recommendations made by Anaya, telling The Tyee the government's response to his UN report was being coordinated by Aboriginal Affairs and Northern Development Canada. However, AANDC refused to comment on the report.

In an official press release response today, Aboriginal Affairs Minister Bernard Valcourt pledged to "review the report carefully to determine how we can best address the recommendations," and thanked the rapporteur for his "important work."

"The report published by the Special Rapporteur today acknowledges that, while many challenges remain, many positive steps have been taken by the Government of Canada to improve the overall well-being and prosperity of Aboriginal people in Canada," said the statement attributed to Valcourt. "Our Government is proud of the effective and incremental steps taken in partnership with Aboriginal communities."

Valcourt's statement made no mention of the report's extensive discussions of what Anaya called Canada's "adversarial approach" to indigenous legal challenges, nor did it make any mention of protracted modern treaty negotiations, which he criticized for "often insisting on the extinguishment" of aboriginal title and rights.

"An important impact of the delay in treaty and claims negotiations is the growing conflict and uncertainty over resource development on lands subject to ongoing claims," Anaya warned. "It is understandable that First Nations who see the lands and resources over which they are negotiating being turned into open pit mines or drowned by a dam would begin to question the utility of the process."

Despite acknowledging some progress since the previous rapporteur's visit in 2003, Anaya also levied a stern rebuke on inadequate social service funding and "episodes and patterns of devastating human rights violations," from residential schools through to an "abysmal" housing crisis.