Two of five families forced from their homes by chronic air pollution from oil sands facilities in Peace River have filed a court injection to stop Baytex Energy from using the atmosphere as a toxic garbage dump. 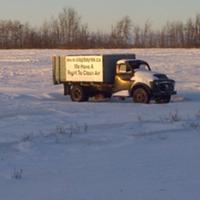 The injunction application, now before Court of Queen's Bench, seeks to stop the company from venting toxic gases from 86 bitumen storage tanks in the Reno Field just south of the town of Peace River for a period of eight months.

"Baytex leaves the top hatches open on its processing tanks and the aerosol plumes make you dizzy, gives you the worst headache you can imagine, makes your throat and nose sore and lots of other bad health effects," said Alain Labrecque, one of the family seeking an injunction.

"The whole place smells like solvents and tar," added Labrecque in a press release. He moved his family away from their home nearly two years ago.

Baytex Energy, a Calgary-based firm, has repeatedly argued that it is following Alberta's regulations about venting and flaring but the regulations actually say nothing about the venting of bitumen from storage tanks. Former energy minister Greg Melchin serves on Baytex's board.

According to annual reports filed by the energy regulator most of the gains that Alberta made in controlling flaring and venting from well sites in rural areas nearly a decade ago has been dramatically reversed by increased bitumen processing and gases released from oil wells being hydraulically fractured. In fact flaring from oil wells has tripled since 2005.

Last year the total volume flared from all upstream oil and gas sources was 33, 379 million cubic feet -- an increase of 13 per cent compared to 2011.

Labrecque claims that Baytex "is leaving the top hatches open on the tanks and emissions are being vented. The air is not so bad when the wind is blowing strong and it's a sunny day. But at night and when the air is still, the fumes and aerosol gasses are overwhelming. And it only gets worse in the winter. Everything in our homes smells of the emissions, a solvent and tar-like smell. The aerosols stick to our clothes and anything that is absorbent."

"The way we have been impacted and treated is not good for anyone," added Labrecque. The government and energy industry are trying to convince Canadians, President Obama, and the rest of the world that our oil sands can be developed responsibly, both environmentally and socially. But that's not our reality. And that needs to change right now."

After more than two years of protests by local citizens the Alberta Energy Regulator (AER) is holding a public inquiry into the "odours and emissions" released by heavy oil operators such as Baytex in the Peace River region.

Some deposits can be recovered with steam injection while others use a cold production method known as CHOPS.

The later method pumps both bitumen and sand to the surface from 600-metre-deep deposits. The ultra-heavy oil is then stored in heated tanks (up to 170 degrees) where gases can build up. Once vented into the air these toxic fumes can travel for miles.