Stephen K. Hamilton thinks he may have solved part of the mystery of "the tar balls" or odd-looking rocks that were noticed in the Kalamazoo River after the catastrophic Enbridge spill of diluted bitumen of 2010 -- about which The Tyee published a story on Monday. 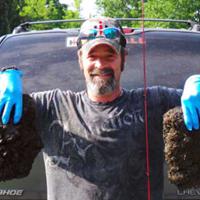 The Michigan State University ecologist says the weird looking rocks are not bitumen-made but natural carbonate or "tufa" rocks. They form in the Kalamazoo wherever mineral rich groundwater enters the river.

"They existed before the spill, and they exist outside the spill zone as well. I often show them to my students."

But the professor suspects the continuous dredging and clean-up on the river by Enbridge (it has been repeatedly been ordered back to the river by the U.S. Environmental Protection Agency), has probably exposed these rocks in greater numbers than ever before.

He's also not surprised that an Alabama lab found oil on the carbonate rocks.

"They are very porous, in part because they are often partly re-dissolved, and could well have trapped some submerged oil in their cavities," wrote Hamilton in an email.

"Thus it is not surprising that the chemistry lab found evidence of Enbridge oil inside the cavities, as that oil has been found everywhere else in the river where material settles out."

Analytical Chemical Testing found particular compounds identical to the compounds "produced from mixing Corexit compounds with crude oil as in the BP oil spill of 2010 in the Gulf of Mexico."

But Hamilton does find the Corexit finding very surprising. First he doubts that Enbridge used the controversial dispersant.

Second, "The compound mentioned as evidence for Corexit use is a widespread water pollutant that also originates in household chemicals, and can therefore also come from sewage and septic inputs to the river. I am not aware of its presence in the diluent, and I doubt that any of the diluent would persist in the river this long."

Craig Ritter, who found and photographed the rocks agrees that Hamilton does have a valid point.

"I do agree that the rocks can be found past the point the oil was said to not have passed, but they still contain Corexit like compounds. Why is this?"

And so the real mystery remains unsolved.

Did Enbridge use a toxic dispersant like Corexit during the spill or does the hazardous diluent, that is mixed with bitumen to make it portable, have a similar chemical signature?

Oil dispersants and condensates are, after all, solvents made from petroleum distillates.

Riki Ott, a trained marine toxicologist, doesn't think that Hamilton's important observations end the story or, for that matter, solve the whole mystery.

"Tufa rocks may have picked up some of the oil sands -- and anything else in the water during their formation, but the CT scans show definite concentric rings of a black substance and sand in some rocks.

"These rocks leave an oil sheen on the surface when crushed and this sheen triggers the same illness symptoms in people who were exposed initially to the tar sands spill. Recreational users walking in the river could crush these rocks, creating an oil sheen. This is NOT normal and it may pose an ongoing health hazard, which is the concern of the Michigan folks."

In the meantime Enbridge has spent more than a billion dollars cleaning up the river because bitumen doesn't float like oil and can't be skimmed.

After the diluent, a toxic petroleum distillate, evaporated, the bitumen submerged and coated the river bottom in ways few emergency responders expected.

"The EPA staff that worked on this, that have responded to oil spills over many, many years, had never encountered a spill of this type of material, in this unprecedented volume, under these kinds of conditions," said Hedman.

Hamilton, an advisor to the U.S. Environmental Protection Agency on the spill, adds that bitumen is extremely difficult to clean up.

"The bitumen reverts to its molasses-like nature once the diluent evaporates, and is is nearly impossible to remove from surfaces like trees and vegetation and river banks. Once the bitumen reaches surface waters, it is prone to sinking, forming submerged oil that later produces sheen at the surface. Over three years later we are still grappling with the submerged oil problem, which has accounted for much of the cost of cleanup, as well as the delay in finishing the work."