The Harper government has dismantled one of the world's top aquatic and fishery libraries as part of its agenda to reduce government as well as limit the role of environmental science in policy decision-making. 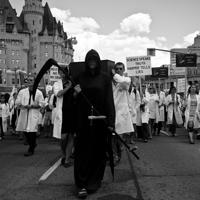 OTHER FEDERAL LIBRARY CLOSURES AND CONSOLIDATIONS

Canadian Heritage: The Library and Archives Canada Staff Resource Centre closed on Nov. 1, 2012. As of April 2013, the Public Service Commission (PSC) was in the process of closing. Plans regarding the disposition of PSC's library collection had not been finalized.

Citizenship and Immigration (CIC): The CIC library closed on March 31, 2012.

Environment Canada: The National Roundtable on the Environment and the Economy was eliminated. Its library was closed on March 31, 2013.

Foreign Affairs: The Documentation Service and library of the Canadian Cultural Centre at the Canadian Embassy in Paris closed on June 21, 2012.

Human Resources and Skills Development: HRSDC closed its libraries in Gatineau, Quebec, and Montreal on March 31, 2013.

Intergovernmental Affairs: The Transportation Safety Board of Canada (TSB) is expected to significantly reduce and eventually close its library.

Public Works and Government Services: PWGSC closed its library on May 31, 2012.

Transport, Infrastructure and Communities: Transport Canada closed its library in 2012.

Canada Revenue Agency (CRA): The CRA is consolidating its nine existing libraries into one, the location of which has yet to be determined.

Environment Canada: Parks Canada will consolidate five libraries into one. Regional libraries located in Calgary, Winnipeg, Quebec City and Halifax will be consolidated into the Cornwall, Ontario location.

Natural Resources: Natural Resources Canada is set to close six of 14 libraries in 2012-2013: two in Ottawa, one in Varennes, Quebec; one in Edmonton, Alberta; and another in western Canada. In 2014, another Ottawa library will be closed.

Last week the Department of Fisheries and Oceans, which is closing five of its seven libraries, allowed scientists, consultants and members of the public to scavenge through what remained of Eric Marshall Library belonging to the Freshwater Institute at the University of Manitoba.

One woman showed up to pick up Christmas gifts for a son interested in environmental science. Other material went into dumpsters. Consultants walked home with piles of "grey material" such as 30-year-old reports on Arctic gas drilling.

Nearly 40,000 books and papers were relocated to a federal library in Sidney, B.C.

"It was a world class library with some of the finest environmental science and freshwater book collections in the world. It was certainly the best in Canada, but it's no more," said Burt Ayles, a 68-year-old retired research scientist and former regional director general for freshwaters in central Canada and the Arctic.

Established in 1973, when foreign governments hailed Canada as a world leader in freshwater science and protection, the library housed tens of thousands of reports, maps, charts and books, including material dating back to the 1880s.

The library contained fishery reports on the decline of sturgeon fishing in Lake Winnipeg from the 1890s, said Ayles, and served as invaluable intellectual capital for public researchers at the Freshwater Institute and world famous Experimental Lakes Area.

"The loss of this library and its impact on fisheries and environmental science is equivalent to Rome destroying the Royal Library of Alexandria in Egypt. It's equal to that," said Ayles. At the time, Alexandria boasted the world's largest collection in the ancient world.

Closure 'makes us poorer as a nation': scientist

Before Fisheries and Oceans hired a librarian to dispose of the library's contents, the collection duly reflected the importance of freshwater in the nation's geography, say scientists.

"I was sickened," said one prominent research scientist who had worked for the federal government for 30 years, and who did not want to be identified. "All that intellectual capital is now gone. It's like a book burning. It's the destruction of our cultural heritage. It just makes us poorer as a nation."

"There are so many willing accomplices to what's going on," the scientist added. "All of our federal libraries and archives are being diminished. It's an ideological thing coming from a right-wing libertarian government."

"The government is either incompetent or malevolent or both," added Ayles.

No scientist interviewed by The Tyee thought digital libraries could replace what has been destroyed.

Digital libraries, for example, often don't include older material and journals and paradoxically reduce access to material due to payment schemes. They restrict rather than expand readership, say scientists.

"You don't get rid of intellectual capital because one day you might need it, and if you have squandered it then you must redo it," explained one researcher. "People are not being told the truth about what is happening in this country."

Federal cuts by the Harper government have forced Fisheries and Oceans to lay off hundreds of researchers, as well as 700 Coast Guard workers; dismantle a marine contaminants program; and close the Kitsilano Coast Guard station, the first line of defence against oil spills. After dramatic cuts to the Canada Offshore Oil, Gas and Energy Research Centre at the Bedford Institute of Oceanography, its director, Ken Lee, an oil spill expert, saw the writing on the wall and took a job in Australia.

Given that the Fisheries Act has been gutted in response to lobbying by energy companies (they found habitat protection "onerous" and it has been removed), government supporters say the infrastructure to protect fish and freshwater is no longer necessary.

The library's closing did not surprise retired water ecologist David Schindler. "In retrospect, I am not surprised at all to find them trashing scientific libraries," he said.

"Paranoid ideologues have burned books and records throughout human history to try to squelch dissenting visions that they view as heretical, and to anyone who worships the great God Economy monotheistically, environmental science is heresy."

Echoes of the Experimental Lakes

The library's closure pours salt on another wound: the dismantling of the world-famous Experimental Lakes Area (ELA).

For nearly 50 years, scientists from around the world have used 58 lakes in northern Ontario for real, in-the-field experiments. These whole-lake studies led to groundbreaking insights on acid rain, mercury transport, gender-bending hormones and phosphate pollution. They also produced some of the longest running data on climate change's impact on water and fish.

The Harper government stopped funding the $2-million facility in 2012, saying its services were no longer needed or redundant. At the time, project scientists were planning to do experiments on bitumen pollutants and their impact on fish and other species.

Former science minister Gerry Goodyear defended the closure by arguing that whole-lake experiments like those performed at ELA could be replaced by smaller scale experiments in labs where they would not jeopardize the entire lake.

Jules Blais, president of the Society of Canadian Limnologists, replied in a May 6, 2013 letter that Goodyear's comments were not only misleading, but inaccurate. Scientists uniformly agree that whole-lake research offers the best evidence to guide policy, Blais wrote, while "small-scale experiments are inadequate to address issues related to ecosystem services, food web structure, land-water interactions, air-water interactions, shoreline communities, and migratory species."

Furthermore, "experiments at the ELA are carefully designed to simulate environmentally-relevant conditions, and are only performed if ecosystems will recover naturally from the manipulation," wrote Blais, a leading authority on mercury pollution.

The closure of the library, which served as a vital source for the ELA, will make it harder for Winnipeg's International Institute for Sustainable Development to rescue what remains of the team of scientists that ran the ELA. A last minute deal, supported by funding by the Ontario government, has been compromised by the federal government. The ELA's remaining researchers all received "surplus letters" last week, which makes it difficult to retain ELA staff.

Schindler, one of the first directors of the ELA, has long criticized the pace and scale of Canadian tar sands production. He co-authored two significant studies that showed the tar sands industry was responsible for significant pollution of waterways in the region. The studies forced Ottawa to develop a new monitoring program for the mega-project.

The ELA cost $2 million a year to maintain, but its research saved governments around the world billions of dollars by preventing water contamination, Schindler said.