The Kelowna-Westside constituency, where Premier Christy Clark and seven other candidates are running in a July 10 byelection, includes one of SNC Lavalin Inc.'s more visible projects in British Columbia, one that provides a reliable source of income for a company whose international reputation has been badly damaged. 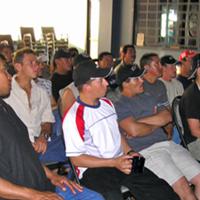 The William R. Bennett Bridge across Okanagan Lake provides some $20 million a year from B.C. taxpayers to the large, Montreal-based engineering firm, whose former board of directors chair Gwyn Morgan donated $10,000 to Clark's leadership campaign and was on her 2011 transition team. Morgan resigned his position with the company in May.

B.C.'s payments for the bridge will continue until 2035, due to a 30-year agreement the BC Liberal government signed in 2005. It's a kind of project SNC Lavalin categorizes as "Infrastructure Concession Investments," which have been a bright spot for the company in a bad time. Another one of these long-term income generators in B.C., the Canada Line, will benefit SNC Lavalin until 2040, thanks to its one-third ownership of InTransit BC.

B.C. also provided another boost for the company in January, when the province's government selected an SNC Lavalin-led team for a contract to build the $889-million Evergreen Line in Vancouver.

BC confident in company

SNC Lavalin's troubles are well known and documented. They include bribery allegations, an RCMP investigation, a 10-year suspension from bidding on World Bank financed projects and charges against two former senior executives.

So far, however, that has not been the case in B.C.

"I don't have any concerns about their work in British Columbia," said Todd Stone, a new MLA Premier Clark appointed transportation and infrastructure minister in early June. "They have a stellar record, frankly, on projects that we've partnered with them on: the Canada Line, the Sea to Sky Highway, the W. R. Bennett Bridge in Kelowna."

Referring to the Evergreen Line contract, the government has "gone beyond the call of duty on this one from a procurement process perspective, to make sure all the protections we can possibly have are there," Stone said. "Things like ensuring there are progress payments made."

Stone also pointed out that SNC Lavalin has "a significant amount of private financing" to complete the project. "Those financial organizations would have very high standards for procurement as well. I'm confident those protections are there."

The government would "try to apply the highest level of scrutiny on any project regardless of the proponent, and I think we're doing that in this case with SNC," he said.

While SNC Lavalin's troubles might not concern Minister Stone, they are the kinds of things the company is required to highlight for its investors. As Lavalin's Management's Discussion and Analysis document for 2012, dated March 8, 2013, puts it, "The Company is subject to ongoing investigations which could adversely affect its business, results of operations or reputation and which could subject it to sanctions, fines or monetary penalties, some of which may be significant."

They include a Feb. 2012 independent investigation ordered by the board into "the facts and circumstances surrounding certain payments that were documented... to construction projects to which they did not relate, and certain other contracts."

The company provided the results of the investigation to appropriate authorities, it said. "The Company understands that investigations by authorities remain ongoing in connection with this information."

It continued, "The Royal Canadian Mounted Police... is investigating the Company’s involvement in projects in Bangladesh and certain countries in Africa and this investigation has led to charges being laid against two former employees of a subsidiary of the Company under the Corruption of Foreign Public Officials Act (Canada) in regard to the Bangladesh project.

"In addition, the Former CEO of the Company and a former Executive Vice-President of the Company have been charged by authorities in the Province of Quebec with various fraud offences allegedly in connection with a Company project in the Province of Quebec and the same former Executive Vice-President has been detained by Swiss authorities since April 2012 in connection with potential criminal charges, including fraud-related matters."

The company also faces class action lawsuits filed in Ontario and Quebec that accuse SNC Lavalin of misrepresentation and seek to recover losses for people who invested in the company between 2009 and 2012.

In April the World Bank suspended SNC Lavalin and over 100 of its affiliates due to fraud and corruption from receiving its financing.

A May 2, 2013 updated filing described the result: "On April 17, 2013, the Company announced a settlement in connection with the previously announced investigations by the World Bank Group relating to the project in Bangladesh and a project in Cambodia, which includes a suspension of the right to bid on and to be awarded World Bank Group-financed projects by SNC-Lavalin Inc., a subsidiary of the Company, and its controlled affiliates for a period of 10 years."

If SNC Lavalin fully complies with the terms and conditions of the settlement, it could be lifted in eight years, it said.

The RCMP has alleged that SNC Lavalin paid some $160 million in bribes to get business in Libya under the Moammar Gadhafi regime and was involved in a plot to get Gadhafi's son Saadi to Mexico.

There needs to be more to public procurement in the province than just seeking the lowest price, said Claire Trevena, the New Democratic Party's transportation and infrastructure critic.

"This is one of the differences between us and the Liberals," she said. Along with price, the government needs to look at how the company will work with the people of the province, what it's offering, how well it will do the job, and its record on worker safety.

While she said SNC Lavalin's international record should raise some red flags, she concluded, "You can't say because of allegations that have been made you won't do any business with them."

Trevena also said long-term agreements, such as the decades-long ones signed with SNC Lavalin, reduce flexibility when issues arise. "That's one of the real problems with private partnerships; you're signing away a lot of control," she said. "There [must be] huge caution when you're signing over things."

Thinking back to the 1980s, much has changed in the last 30 years and much is likely to change in the next 30, making it difficult to have confidence about what things will be like, she said.

During one of last week's debates in Kelowna, the Canadian Press reported Clark's support for a second bridge over Okanagan Lake. "I believe it’s time for us to start planning a second crossing," she said.

BC Conservative candidate Sean Upshaw responded, "I wonder whether she is Christy Clark or Kris Kringle."

Indeed, such a multi-million dollar project would be a gift -- not just for Okanagan commuters, but also for whoever wins the contract to provide it.