After more than two years of fighting his employer for having been punitively terminated for complaining against abuse, Alfredo Sales received justice -- together with 76 other migrant workers. 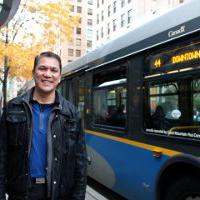 Their employer, Denny's Inc., appeared at the Supreme Court of B.C. today to settle a class action suit that the migrant workers launched in January 2011. Sales was the first to blow the whistle on the transnational corporation for not having paid his and other migrant workers' airfare, overtime and recruitment agency fees and not being given their promised contract hours.

Most of the members, like Sales, are Filipino and were recruited by Northland Properties, the parent company of Denny's, through the Temporary Foreign Worker Program. The suit is unprecedented in Canadian legal history.

"The truth is that you should not belittle the strength of anyone," Sales said in Tagalog. "Never underestimate that everyone has capability, especially God-fearing people such as myself. I know the difference between right and wrong. If it's right, you fight for it, you stand for it," Sales added.

The settlement agreement grants the following to the 77 class suit members, having been approved today in court:*

The migrant workers paid varying amounts to ICEA, up to $10,000 to process their documents to work in Canada -- a fee that legally is supposed to be borne by the employer.

'We were all victims'

The settlement agreement does not require Denny's to pay punitive damages for injury to dignity and self-respect. Sales disagrees with that.

"I don't know how they can account for that (loss of dignity)," he said. "I was a victim, we were all victims -- it was different for me because I was terminated," he added.

Sales had to live with a friend who accepted him without paying rent after his contract was ended three and a half months early for complaining. His family suffered while he could not send home remittances at the time.

The settlement agreement reminded him of the day he first sought help from the Employment Standards Branch of B.C., when he cried "like a little boy." "They shouldn't have done this! This is not fair! Why would they terminate me?" he said to the officer who managed his case, Amanda Clark.

Clark did manage to get Sales his lost wages of $6,755.39 and Denny's paid a fine of $500 in April 2011 for violating Section 83 of the Employment Standards Act, which protects workers from being punitively terminated for filing complaints.

Still, Sales wishes that the agreement included damage to dignity. "They should also give value to what I went through," he said.

A Denny's spokesperson said that the company's representatives will be conducting a press conference soon, but have not yet decided on date.

Denny's will pay $40,000 to Migrante B.C., a Filipino migrant workers advocacy group, as part of the settlement.