Unions that filed a request for a judicial review of permits allowing miners from China to work in British Columbian mines haven't been satisfied by news the federal government will review the case. 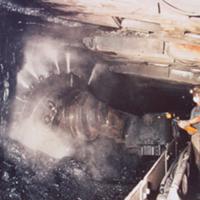 Miners Could Have Been Trained Here Easily

A spokesman for the unions said that's because despite news the federal government will examine the use of the Temporary Foreign Workers Program by B.C. mines, its attempt to have the permit applications for the workers released has been denied.

Federal Minister of Human Resources and Skills Development Diane Finley said in a statement Thursday the ministry is concerned about the process that led to the workers' presence at mines run by HD Mining and Canadian Dehua International Mines Group.

In order to get a TFW permit, companies have to produce a Labour Market Opinion showing after making sufficient efforts to recruit Canadians for the job, none were found.*

But recently, advertisements for positions at mines runs by HD Mining and Canadian Dehua specifying Mandarin skills were preferred for the job were uncovered.

Labour groups said the language requirement was meant to disqualify Canadian miners so the companies could apply to bring in 201 workers from China at smaller wages.

Minister Finley said it appears those allegations may have merit.

"We are not satisfied with what we have learned about the process that led to permission for hundreds of foreign workers to gain jobs at the Dehua Mines subsidiary in B.C.," said Finley's statement.

"In particular, we are not satisfied that sufficient efforts were made to recruit or train Canadians interested in these jobs. Specifically, the requirement that applicants have skills in a foreign language does not appear to be linked to a genuine job requirement."

She said it is clear there are some "problems" with the program.

'Trusting government has been a failure': union rep Loftus

But Lee Loftus representing the International Union of Operating Engineers Local 114 and the Construction and Specialized Workers Union Local 1611 -- the unions that filed the court action -- said he doesn't have faith a meaningful review will be conducted.

"Trusting the government to this point has been a failure," said Loftus.

The unions' legal application -- that was rejected by the Department of Justice -- requested the work permits for the miners be retracted and disclosure of the LMOs associated with the permits be granted.

No reason for the rejection was given.

Loftus alleged the federal government doesn't want the information from the applications released because there is more to the story.

"That tells us people are being dishonest about how they're getting applications done and that Labour Market Opinions are probably tainted across the board no matter where we go and that the system is in a complete failure," he said.

He added the unions said they intend to take their case to a judge to force the release of the documents.

But Finley said any litigation could hamper the review.

"Is that a threat?" asked Loftus when told of the comment.

"The B.C. unions should just disappear and not say anything?"

Scope of review in question

Finley's statement said the review would affect the entire program, but a staff member from the ministry indicated to the Tyee only the case involving the miners would be reviewed.

The BC Federation of Labour said there appears to be some confusion about if the entire Temporary Foreign Workers Program is up for review, or just this case.

"We read the release, we know that what should be done is a review of the program, said BC Fed President Jim Sinclair.

"We agree with the government's statement and we hope that they're going to review the program."

Meanwhile, B.C.'s Minister of Jobs, Tourism and Skills Training Pat Bell, who has defended the mine's use of the foreign workers, said the situation is out of his hands.

"The Temporary Foreign Worker program is the jurisdiction of the federal government. Any problems they may have identified in that process are theirs to address," he said in an email.