Miloon Kothari is back in Vancouver this week with a simple question: "Why hasn't there been more progress?" Kothari is an architect who spent eight years as the UN special rapporteur on adequate housing, and in 2007 he came to Canada as part of his fact-finding mission. 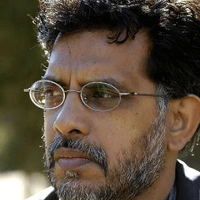 At the time, in Vancouver, Kothari spoke to the Tyee about his impressions of the housing situation in Canada and the Lower Mainland.

Tonight, he gives a talk at SFU Woodward's on his UN report findings.

This is his second visit to Vancouver since issuing the report, but he says he has seen little improvement in Canada's national housing strategy since then.

Strolling Sunday along East Hastings Street, we stop in at the makeshift market next to Pigeon Park ("They sell everything here! Whatever they can find") and then head over to First United Church to meet with their staff. Kothari is touring the neighbourhood before he meets with city officials Monday to discuss his recommendations for addressing affordable housing. Later on this trip, he will also be meeting with NDP leader Thomas Mulcair to address the need for a national housing strategy.

As we explore the Downtown Eastside, Kothari comments on the rapid pace of change in the area, but he notes succinctly as we walk, "The crisis has not improved." We finally settle on a patch of grass at McLean Park and sit down for our interview at the annual Family BBQ.

During our conversation, here are some views Kothari shared...

On Vancouver during his mission and now:

"Vancouver faces an affordability crisis. The homeless crisis is there for everyone to see and the process of gentrification seems to have rapidly increased, as has the speculation of housing. I understand there has been a task force set up to look at affordability, but they're not dealing with affordability for people below a certain income, so I don't see much change for the better."

On affordable housing for all:

"The direct result is that there are more people who are homeless and more people who are doubling or tripling up in homes. More people are living in a precarious housing situation because they don't have an option. So the question I always have for governments is: 'Why do you not have this concept of the housing continuum and why is it that people are left essentially to take care of themselves?'"

On the not-so-free hand of the market:

"The other problem that I see -- that is very true in Vancouver -- is that even the solutions that are being proposed are market solutions. [For example] making it possible for developers to set aside a certain amount of affordable housing or playing with developer costs.

"There are countries in Europe -- Germany is one, Austria is another, Switzerland to a certain extent -- where they have always stressed that a certain percentage of housing has to be rental. You have cities in Europe where there is very strong rental legislation and rent control, which is essentially missing here. Here you have an absurd situation where a landlord can throw somebody out because they want to renovate and then they can raise the rents -- obviously somebody with low income cannot come back in."

On housing as a right:

"There are so many vulnerable groups that are never going to be in a position to buy, so then the question becomes what are we going to do for them? And I don't see any serious or genuine attempt to help.

"Every time I come here, I hear about more task forces and more committees and even now in 2012. Why is the task force being set up now? These problems have been in the city for the last 10, 15, 20 years. Why hasn't there been more progress?

"What is missing -- and this is missing across the country -- is what Canada did for the non-Aboriginal part of the population: the large-scale state intervention in social housing and in corporate housing. There was a lot of housing stock built that took care of middle or lower income people; that essentially stopped in the early '90s, and it hasn't been picked up again. That's one of the main reasons you have the housing crisis you have in Canada today."

"Vancouver is a very good example where you have very serious problems that should have been addressed a long time ago, but have not."

Miloon Kothari is speaking at SFU Woodward's tonight at 7 p.m. about "The Right to Adequate Housing: From Practice to Policy to Practice."