When the job to lead the British Columbia New Democratic Party came open a year ago, there were those who thought Nathan Cullen should enter the race. 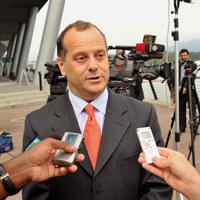 The member of parliament for Skeena-Bulkley Valley lives in Smithers and had been the environment critic for the federal party. He was vocal on issues important to many British Columbians, including oil tanker traffic, pipelines and coalbed methane.

To certain people who wanted a greener provincial NDP and a possible premier with a strong environmental side, Cullen seemed perfect for the job Adrian Dix eventually won.

Cullen said at the time he was considering entering the race, but the timing for him was wrong. His twin boys were then five months old.

When he decided not to run, however, he played down the family factor and stressed that there was still much work he wanted to do federally. A year later he's in the running to lead the federal party, a job that came open with Jack Layton's death.

"It's hard, man," Cullen said, when asked how he might balance being leader, perhaps prime minister, with having two now 15-month-old boys at home in northern B.C. "There's no way around this. We all make choices."

Speaking on the phone from Edmonton, where he was on a mid-November campaign stop, he cited a strong community and a supportive spouse, Diana, who made it possible to enter the race. "My ability to be generous with myself is directly predicated on her ability to manage twin boys. She amazes me."

Cullen, 39, does describe seeking the leadership as something that comes down to a kind of generosity, a commitment to public service. "There's not an enormous amount of ego hooked up in this for me, which may be difficult to contemplate," he said. "This has not been a conspiracy of mine for many years and months."

He'd discussed the idea of one day running for leader with people like Layton and former leader Ed Broadbent, but knowing he wanted to run didn't come "until sitting in Roy Thomson Hall that day in Toronto" at Layton's funeral.

The ceremony focussed on generosity and how often that's lacking in public life, Cullen said. People had been urging him to run, and it seemed something he could contribute, he said.

Since entering the race, Cullen's biggest splash was with a proposal to hold joint nomination meetings between the NDP, Liberals and Green Party in ridings now held by the Conservatives.

The idea is to get past partisan politics, avoid splitting votes and consolidate the anyone-but-Harper ballots making it impossible for the prime minister to win another majority government with only 40 per cent of the votes.

Replacing the voting system with one that better reflects the popular vote, such as a mixed member proportional system, has long been an NDP position. And while political parties tend to forget their commitments to electoral reform once they form the government, Cullen said for him "It's the first order of business."

Introducing such a system would make it unnecessary for parties to co-ordinate in the way he's proposing for the 2015 election. "It's one time," he said.

Politics have become frustratingly narrow, all focused on wedge issues and campaigns targeting small pockets of voters, he said. "We need to undermine that and show we can do things differently."

Going into the leadership contest, a third of the NDP's 90,000 members were in British Columbia. That could give Cullen, the only B.C. MP in the race, an advantage.

And he does see several key issues from a perspective that will resonate in the province.

Prime Minister Harper is right that the Enbridge Northern Gateway pipeline proposal, which would take tar sands oil from Alberta to Kitimat, is a "no brainer", he said. "I agree with him, but in the opposite way. You'd have to have no brains to approve this thing."

It's "a real shame" Harper has been saying the pipeline will be approved, even though the hearings on it are yet to happen, he said.

Last year Cullen introduced a motion, which passed, to ban tanker traffic on the province's north and central coasts. "This fight is personal for me obviously," he said. "This is a fight we're going to win."

The senate, where B.C. is horribly under represented, should be abolished, not reformed, he said. The recent proposal to raise the province's number of seats in the House of Commons -- along with Alberta, Ontario and Quebec's -- is "most of the way there," he said.

He's critical of Harper's abandonment of housing and enthusiasm on crime: "Building dozens of prisons is not an affordable housing strategy, despite what the prime minister thinks."

He supports treating first nations more fairly. "By every measure we can find, the Indian Act and the way we've gone about governing first nations has failed," he said. The government trails many companies that understand the reality of aboriginal rights and title, he said.

And he's supportive of his opponent Brian Topp's proposal to make the tax system more fair. "Tax is not a four letter word," he said, noting it has to be talked about carefully by the party. "We need to stay away from overheated rhetoric about eating the rich."

Harper has said there are no good taxes, Cullen said. "That kind of ideology is dangerous when it's run amok, and that's where we are in Parliament," he said. "We can have a grown-up conversation about this with Canadians and they're not going to run screaming to the hills."

Support of BC MLAs

Cullen has already picked up endorsements from four of the province's MLAs, including three who represent constituencies in the north -- Doug Donaldson, Gary Coons and Robin Austin. The fourth is Norm Macdonald, who represents Columbia River-Revelstoke and is a former mayor of Golden.

"I am supporting Nathan because he understands the challenges this country faces and is capable of delivering on his commitment for a progressive government," said Coons in a statement posted on Cullen's website. "Nathan is a tireless community advocate, has represented his constituents well and has inspired young people to get involved in politics to help build a better Canada."

Austin cited Cullen's communication skills and Donaldson spoke about his ability to draw people together from diverse backgrounds and perspectives.

"Nathan Cullen is one of Canada’s most exciting and inspiring political talents," said Macdonald. "His progressive views are firmly grounded in the politics of rural British Columbia where common sense and hard work are highly valued."

Topp, who also has strong connections to the provincial party, is the only one of the nine candidates so far with more endorsements from B.C. MLAs.

Cullen figures B.C. will be central to the decision, but there's a long way to go until the March 24, 2012 vote. Anyone who joins the party before mid-February will have a vote, he said. "I think the numbers will balance out."

Memberships are moving fast, he said, including in Quebec where the party has had few members but elected 59 of the province's 75 MPs. "I'm finding an enthusiasm and a hunger on the ground that's probably unheard of in NDP leadership races before."

On Dec. 10, the focus of the race will be on the Vancouver, where candidates will gather for a townhall-style meeting at the B.C. NDP convention.