Kris Foot has a message for those going to the City of Vancouver's Stanley Cup live sites. 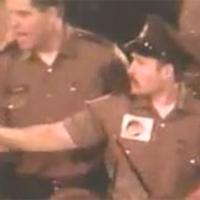 "Be careful if you go, they're not as safe as they look," says the 25-year-old Prince George man.

Like the 2010 Winter Olympics, Stanley Cup finals tickets are scarce and expensive, topping out at more than $900 face value. So city hall is blocking off the Granville Mall at Robson Street and Hamilton Street in front of the CBC for free, no booze, open air viewing parties of Hockey Night in Canada telecasts of the Vancouver Canucks' battle with the Boston Bruins.

The attempt to prevent the spoilage of the 1994 riot and rekindle the spirit of the 2010 Games is different from the $18 million LiveCity setups. These don't include a full concert stage or corporate pavilions. Still, the legacy of the worst crowd control incident of the Olympics lingers.

Foot was working as a security guard for Sensor Protection Group at David Lam Park in the overly popular LiveCity Yaletown. With every passing day, crowds grew, bands got louder and more fans were hopping the fences to join the throng.

"People were finding their way in," Foot says. "They didn't have enough security to monitor every foot of the fence. They'd pop over, squeeze into the crowd."

Minutes of the city's Olympic operations committee meetings show the emergency exits were locked and staff did not know where the key was. Officials also did not know the maximum capacity of the site until agreeing to an expert's advice of 9,000 on Feb. 18, 2010.

Some of the same officials, including fire chief John McKearney, held a meeting on the morning of Feb. 16, 2010 to figure out a strategy. About 12 hours later, St. Catharines, Ontario indie rockers Alexisonfire appeared onstage at 9:25 p.m.

Within moments the crowd surged, the barricades buckled and broke. The show was over before it really began.

Singer George Pettit pleaded with the crowd to be "polite and understanding." Nineteen people were injured and nine hospitalized. One of them was Foot.

"I was standing dead centre, I had eight guys to my right, eight guys to my left," Foot remembers. "When the barricade initially started to tip because of the crowd, I moved forward to push it back. It was only up an inch, then it really came, that's when it landed. It hit me in the hip and landed on me and hit my knee. But because of the adrenaline, I just stood up right away."

Foot says he stood up immediately and switched from security mode to first aid, using the skills gained from his occupational first aid ticket. He moved a teenage girl with a serious leg injury into a wheelchair and pushed her into the first aid tent where her pants were cut off to treat her wound.

"It was torn right to the bone, from her knee to the foot, it looked like a grenade went off," he said. "I guess my adrenaline wore out and the pain hit me, I totally collapsed and knocked stuff over at the tent. I was immediately put on a gurney and rushed to hospital because they thought I broke my back."

Foot said he suffered knee, hip and lower spine injuries, the full extent not known until an MRI scan two months later. The back pain continues and doctors have told him he'll be susceptible to arthritis pain in his 40s.

Ten days after the incident, Foot received a consolation letter from Mayor Gregor Robertson inviting him to attend the Paralympics. At first, he said, city hall told him he'd be eligible for civic insurance. Then he was referred to WorkSafeBC, which had already told him he couldn't sue.

'It's ruined my life'

It hurt so much that Foot couldn't stand to use crutches, so he used a wheelchair for two months. Short-term WorkSafeBC disability payments of $546 a week were cut to $245 a week. His rehabilitation and compensation ran out last August and his father came to drive him home. He was unfit to return to his full-time job as a security guard and first aid officer at University of Northern British Columbia.

"It's ruined my life completely," Foot says. "I don't have a job right now and I have juggled other jobs that don't make ends meet because I have lost my $24-an-hour job."

At least one lawsuit has been filed by a concertgoer, who may have been the same one Foot helped rescue.

A March 30 lawsuit filed in British Columbia Supreme Court on behalf of 17-year-old Jasmeen Khera claims the Port Coquitlam teenager was trampled and skin ripped off her lower right leg in the melee.

Khera's father wants compensation from the City of Vancouver, promoter Live Nation and the unnamed barricade manufacturer for failing to ensure safety. The free concerts were held in a park "knowing that it was not designed or suitable for such purposes," according to the writ.

"She's had one surgery and she's scheduled for another one," said Khera’s lawyer Usman Ghani in April. "We'll see how her condition improves and what kind of residual scarring is left after all these surgeries."

City council authorized a $303,456 subcontract for Sensor Protection Group. The company website is offline and the director of operations, Barry Wilding, is now a senior consultant and account manager for Live Host International where he "works closely with Live Nation Concerts Canada securing close to 200 events a year" according to his Linkedin profile.

Wilding did not respond to an interview request on May 31. Neither did Vancouver city manager Penny Ballem.