Twenty-one babies died in their sleep, and not enough was done to protect them. That is the grim message of a report issued yesterday by Mary Ellen Turpel-Lafond, B.C.'s representative for children and youth. The report looks into the deaths of 21 children under two years of age between 2007 and 2009. 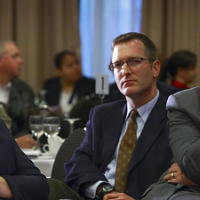 Long after Deaths, Why Children's Ministry Never Got Fixed

The report, "Fragile Lives, Fragmented Systems: Strengthening Supports for Vulnerable Infants", calls on the government to develop provincially coordinated standards for postnatal public health nursing in the province. Ms. Turpel-Lafond is the province's first representative for children and youth, appointed in 2006 after the passage of a bill creating the post.

In addition to highlighting the role of poverty and intergenerational trauma in the families of the children who died, the report calls for a much more integrated and coordinated approach to child welfare in the province.

The report emphasizes the need for better reporting and review by ministry staff of critical incidents in which children in care are hurt or killed.

"What this report reveals is a system in disarray," Linda Korbin, president of the B.C. Association of Social Workers, told The Tyee by phone on Jan. 27. "The government has simply failed to provide enough resources and staffing to do the job."

"One of the two key themes of this important report," Montani told The Tyee, "is how deeply poverty hurts children, and how deep the impact is on aboriginal children of intergenerational colonization and poverty. When you add that to an inadequately staffed and stressed out ministry with overworked social workers, you are setting people up for failure."

"The second important lesson is that the system is fragmented and flawed, underfunded and underresourced," she said. "There has been far too much churning of structure in MCFD, and the ministry has lost far too many workers. This means the ministry's many hardworking and professional staff don't have the resources to do the essential preventative work that would have helped protect these children."

'Some very likely' would have lived: Turpel-Lafond

"It isn't possible to say that with adequate services, all of these infants would be alive today, but as birth circumstances and multiple common risks play such significant roles in healthy infant development, it is reasonable to say that some of them very likely would be," said Turpel-Lafond. "The lack of rigorous, integrated system-wide services and interventions led to many missed opportunities for prevention and effective response."

All the deceased children were known to the ministry of children and family development, and they all died in their sleep. Fifteen of the children were from first nations families, and nine of those 15 died on Vancouver Island. (The infant mortality rate for first nations children in B.C. is twice the rate for non-Aboriginal children.)

The children who died under MCFD attention came from families that had already experienced significant trauma, the report notes. Twenty of the 21 families had suffered intergenerational trauma, with 15 of the mothers' families having documented abuse or neglect, and 14 having incidents of domestic violence reported. Sixteen of the families had reported issues with substance abuse, and 12 had reported instances of depression or suicidal behavior. Despite all these warning signals, the report notes:

"Some of the most fragile families in our province are slipping through huge cracks here. Government needs to take a hard look at this. We need to fix the existing lack of a coordinated and responsive approach, and create seamless coordination among all support services."

The report notes that only 14 of the 21 deaths were reviewed by the ministry, and calls for improvements in MCFD internal review practices. But Darren Harbord, a media spokesman for the ministry told The Tyee yesterday that all 21 cases had gone through a preliminary review process. In seven of the cases, he said, there was no direct link between ministry practices and the incidents that occurred. For instance, there were situations in some of them where the infant was medically fragile or died of natural causes.*

The representative's report, however, suggests that the 14 death reviews that were conducted shared some disquieting shortfalls, including lack of clarity on how the decision to review was made, inadequate terms of reference, analysis that missed key issues, recommendations that failed to address issues revealed in earlier analysis, lack of information as to whether any action had been taken on recommendations and failure to meet ministry standards in terms of time lines for completing reviews.

The MCFD's Harbord told The Tyee that six children died in ministry care in the first half of 2010, the most recent figures available. Three deaths, he said, are classified as "natural"; one is classified as "accidental" and two are currently classified as "undetermined" and still being investigated by the Coroner's Office. However, if the scope of the question is widened to include children receiving ministry services as well as those in care, government figures show the number of fatalities for the first half of 2010 goes up to 29.

In a report issued last December, Turpel-Lafond indicates that her office and MCFD staff sometimes disagree about whether a critical incident report ought to be filed. Addressing a situation in which a vulnerable special needs child was left unattended with her mother's body for several days after the mother's death, the report notes:

Another tally of harmed children

Another perspective on how well children are doing while in the care of the ministry of children and family development is found in a recent report from the public guardian and trustee of B.C.

Of those who were reported as harming children in care, 55 were foster parents or unrelated caregivers, 54 were friends or acquaintances, and 18 were parents or other relatives.

The office of the public guardian and trustee is responsible for defending the financial and legal interests of its wards, as co-guardian together with the ministry, of all children whose parents are unable to care for them. The split guardianship structure (with the ministry as guardian of persons and the office of the guardian as protector of the child's legal and financial interests) is desirable, the report argues, so that the public guardian and trustee can criticize the ministry, and, if necessary, sue the province for negligence.

Contacted yesterday, Stuart Chase, media spokesman for the public guardian and trustee, was unable to tell The Tyee whether his organization had in fact ever exercised the negligence suit option.