I’m suggesting this slightly inelegant term because of a growing body of research that shows audio entertainment is beginning to cut into the time audiences once dedicated to video and text.

The trend is well documented in the U.S., but this is the first year the listening boom has been so obvious in Canada.

There’s such a demand for Canadian audiobooks that Audible, the audio wing of Amazon, opened a Canadian store in the fall. To support it, they’re planning to invest $12 million in producing Canadian authors read by Canadian readers so we can hear our a-boots as they were meant to be heard.

To implement that, they’re partnering with Ryerson University in Toronto to train their media and performing arts students in the techniques for voicing and producing audiobooks the Amazon way.

“Audible is going to be employing so many actors that you’re going to have trouble finding somebody to serve you cappuccino,” Margaret Atwood joked at the new shop’s Toronto launch party.

Kobo, the Canadian company for eBooks, also jumped into the audiobook market this the fall.

Over at Accessible Media, which built its business on providing audio products for the visually impaired, they’re also serving the time-starved with products like the Walrus podcast. Even if you don’t have time to read the magazine, you can listen to Lloyd Robertson sound out those long reads in the same trustworthy tone he once delivered the CTV news.

But perhaps one of the most telling signs of the audio revolution is the growing roster of sponsored podcasts produced by a Vancouver company, Pacific Content. They’re running on a business model that radio’s pioneers would recognize.

As their name implies, Pacific Content does something called branded podcasts, but they’re not quite like anything else on the content marketing landscape. For starters, they’re good.

That’s a huge surprise. As anyone with a soupcon of media literacy knows, the various euphemisms for paid content — brand journalism, service journalism, solutions journalism, advertorial, content, native advertising, partnerships — are just your first warning that whatever you are about to read, hear or see will suck.

And worse, that content is about to exploit and/or mislead you in service of whomever paid to convince you of the value of their political notion or consumer product.

This is such a universal truth that it is also the reason many outlets try to bend the rules and pass content off without a clear label. They hold a faint hope that their mind-bogglingly bad piece on breast glitter — I’m looking at you, CBC — is some genuine trends piece. As opposed to what it really is: marketing drivel.

Steve Pratt, one of the co-founders of Pacific Content, which employs about 17 people, started laughing at my somewhat-too-blunt assessment of contemporary content marketing.

But with more than 20 years of media experience, he knew exactly what I meant. Before going into the podcasting business in 2014, Pratt spent a decade at CBC radio, where he was the director of digital music. The previous decade was spent in entertainment television, including shows like CTV’s eTalk and kids programming at YTV.

Courtesy of a career spent in entertainment, Pratt is more alert than most on the news side to giving the audience what they want. (Or else.) When they launched the company — he’s one of a quartet of co-founders — they set out to solve one of media’s biggest business problems: the advertising model doesn’t work because ads no longer reach consumers.

Advertising began failing around the time VCRs arrived in the 1980s, allowing audiences to skip commercials. Online ad revenue has been in freefall since the arrival of ad blockers, about seven years ago.

Even podcasts, which looked like they might have cracked the problem through a combination of entertaining ads and devoted niche audiences, now have to contend with “skipping” features on some of the podcatcher apps.

While wrestling with the problem of audiences eluding (dreadful) ads, Pacific Content hit on a more traditional solution to funding their wares and our amusements: sponsorship.

“The [podcasts] are aligned with the brand but it’s not about the products or services. We put the audience first,” Pratt said. “We always ask ourselves, does this podcast, in anyway, feel like an infomercial? Would you listen to this podcast if you weren’t working for the company?”

There’s no hard sell in their shows. I heard no sell at all, beyond mentioning the sponsor’s name. In the case of McAfee’s Hackable?, the company that sells security software is taking a timely look at online hazards such as the internet of things, talking dolls and digital assistants. That strikes me as less a marketing scheme than a public service, so if it wins them some business along the way, I say good on ‘em.

Mozilla, the company behind the Firefox browser, sponsors IRL: In Real Life, which also seems like a public service. It’s a good explainer podcast about internet issues like datascraping and net neutrality. The Front Row, about education and technology, is sponsored by a company I’d never heard of: 2U, which produces online courses. Again: you learn stuff.

Pacific Content’s model is reminiscent of the sort of shows that vintage radio lovers will remember, like Lux Radio Theatre. Despite bearing the Lux brand, they weren’t doing plays about soap. Lux sponsored high quality audio drama featuring Hollywood stars and, in return, they enjoyed gilt-by-association. In American public media, where the sponsorship model is still alive and well, they have dubbed this the “halo effect.”

This may explain why all of Pacific Content’s clients are American. While Canadian companies are doing podcasts to promote themselves, most sound like a late night TV ad and could well be used for enhanced interrogation.

Pratt said their goal is to help their clients think like media companies, not advertisers. And in some ways, their shows sound like public radio’s public affairs shows. But mostly, Pacific Content’s offerings remind me of something that barely exists now: trade magazines.

It was once possible to know about other industries and other worlds because of a vast network of trade publications that covered what might be called shoptalk. As a young beat reporter, I read trade mags about everything I covered — computers, advertising, Hollywood, the ballet biz, the legal world. They didn’t promote any one company; rather, they gave readers insight into the issues at play in that field. For one year in the ‘80s I subscribed to magazines about the funeral trade, including Casket & Sunnyside. I’m not making that name up! And it was surprisingly entertaining. Sadly, they went (six feet) under.

Pacific Content’s success as a small digital business that “bootstrapped” — invested their own money and built the biz slowly rather than inviting venture capital to pump it up fast — raises the inevitable question: could this model work for news? 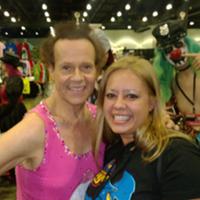 ‘Missing Richard Simmons’: What It Is, Why It Addicts

“I can’t imagine a brand wanting to get into news — it’s so polarizing,” Pratt said.

Pratt adds that it takes a certain kind of corporate culture for a company to promote itself in such an unconventional way. Although audiences for podcasts are growing fast — about 24 per cent of U.S. adults listen regularly — the businesses that opt to produce entertainment instead of advertising have to be, as he phrased it, “creatively brave.”

This is partly because there is no one model for what makes a good podcast. It’s an industry of niche markets and specialty interests and surprise hits in which everything old is suddenly new again. And it’s small by the standards of mass media. In podcasting, a million downloads is the sign of a major hit.

But Pratt said that for him, it’s the newness and the unpredictably of the podcast industry that makes his job exciting.

“There’s no church and state,” he said, referring to how media people divide shows into the entertainment that draws an audience and the advertising that wants it. “We just try to make the best podcasts we can.”