The latest podcast obsession sweeping pop culture is an audio version of reality entertainment that is so well made it’s confusing even journalists into thinking it’s news.

Missing Richard Simmons is reminiscent of The Bachelor or films like Catfish or any of the dozens of reality TV-style entertainments. This time it’s an audio mystery in which podcaster Dan Taberski spends six episodes trying to find out why his pal Richard Simmons, the fitness guy, retired abruptly from celebrity life in 2014.

I felt vaguely unclean after listening to the first episode (as one always does with reality shows). The genre turns us into voyeurs. It’s a touch prurient too. Apparently, Simmons used to make the hot guys in his exercise studio, Slimmons, take off their shirts and do push-ups over him. (Eeeuuuuwww.)

So when journalists at places like the New York Times and CBC’s The Current began clutching their pearls over the show’s lack of “journalism” ethics for supposedly stalking Simmons, I was mystified. Did they think that show about Honey Boo Boo was a piece of journalism too? How about Project Runway?

Missing Richard Simmons is not journalism. How do I know? You mean, aside from the fact that covering celebrity hijinks is not in the public interest (though it clearly interests the public)?

Well, for starters, intrepid podcaster Taberski is not a journalist, nor did he pretend to be. He has an IMDB bio that reveals 18 years as a reality TV producer, including seven years with The Daily Show.

Now consider that his producer and distributor, Pineapple Street Media, is one of a new breed of companies using journalism techniques to do marketing. They make what is known as “branded” podcasts, borrowing on the subtle style of early radio sponsorships to promote a client.

Marketing-as-entertainment is a growing field. Vancouver’s Pacific Content, which is run by former CBCers, makes a number of shows for businesses, including the Slack Variety Pack for Slack, a private messaging app designed for business. Brooklyn’s Gimlet, which launched in 2014, began by producing ad-supported podcasts done in the style of NPR’s This American Life. But they expanded quickly into branded podcasts like Open for Business, for eBay.

Pineapple Street Media also made a podcast for Hillary Clinton’s campaign called With Her. And it does Women of the Hour for Lena Dunham. She’s the entertainment wunderkind who also writes and stars in the HBO show Girls, runs a newsletter, and is busy creating an Oprah-like media empire.

All these companies craft entertaining, superbly made podcasts, some of which incorporate facts, interviews and research in order to engage an audience. I’m a fan of many of these shows. But no one would call what they do journalism: their podcasts are designed to amuse the audience while they serve the interests of their clients, who are sometimes euphemistically referred to as partners.

I consider that kind of storytelling as entertainment with an agenda. But it’s not clear what the agenda might be for Missing Richard Simmons beyond raising his profile with audiences under 40. Or maybe Taberski is between gigs and wants to show off his own doc-making chops, which are considerable. The show is an addictive romp.

By the time Taberski got to episode three, “The Maid and the Masseuse,” I was doubled-over laughing at the whole ridiculous mess. You see, Simmons’ former companion/masseur claims his archenemy — Simmons’ housekeeper — is “literally a witch” who put a spell on the warm-hearted little guy. He even wrote a fairy tale about it: King Rich and the Evil Witch, $39.94 for the eBook.

Who knew Richard Simmons’ life was a screwball comedy? Until the show, I had forgotten about Simmons, who was famous in the 1980s and ’90s as the world’s most unlikely fitness guru. While hard-bodied taskmasters were making exercise videos about feeling the burn, Simmons was noodling around in his satin tank top and short-shorts “Sweatin‘ to the Oldies.”

He was relatable, as they used to say. And fascinating, partly because he is among those performers with little or no obvious talent who somehow manage to become famous for being famous. He was a fixture on late-night talk shows and overnight infomercials. Like Kim Kardashian today, you couldn’t escape him.

As the podcast recounts, he loved the spotlight so much that when Hollywood tour buses pulled up in front of his mansion, he ran out to take selfies with his fans, long before selfies were a thing.

So when Simmons decided to escape public life, rumours swirled. Was his maid using black magic to hold him hostage? Was he deeply depressed over the death of his dogs?

Or so the podcast would have me believe. Who knows if that’s true? This is storytelling, not journalism. Taberski doesn’t answer to an editor, a publisher, or any code of ethics, as he would if he were making an NPR journalism podcast like This American Life or its spin-off, Serial. He is just some guy who has experienced something and decided to make an expensively produced podcast to tell us all about it.

Why does Taberski want us to know about all the people missing his wonderful pal Simmons, who is such a generous soul that he would volunteer phone support for strangers he met at events who were struggling with obesity and self-esteem?

Who knows? But given what I do know about the world of content marketing — propaganda of all sorts masquerading as journalism — let me offer one possibility, admittedly unproven.

The podcast has all the markings of a sophisticated publicity campaign designed to build an audience for some other project. Perhaps a reality TV show? I can imagine the aging Simmons, on his home treadmill, watching the likes of the Kardashians getting rich on a shtick he perfected years ago and feeling like he missed the reality TV boat. 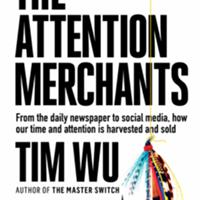 The Attention Merchants: A History of Advertising’s Long Grip on Media

But how could a once famous aerobics instructor, now 68, hope to compete with today’s sex-bomb reality stars? Well, what a coincidence! A reality TV producer just happened to be working out at his Slimmons studio when Simmons decided to pack it all in. And for some unknown reason, this reality TV producer now has an inexplicable urge to tell us all about the kind, generous, wonderful man who has gone missing...

I would not be surprised if Simmons is in on it. I won’t rule it out until he sues Taberski, who has been “stalking” him since last summer.

I used to have an editor who warned me to be skeptical of stories “too good to be true.”

Let’s just say Missing Richard Simmons feels to me a little too good to be true.

But I urge you listen! Although the season six finale ends with a whimper, the three hours it takes to get there are a lot of fun.