By most measures, you'd think the readers of the Victoria Times Colonist -- my hometown's newspaper -- would have at least a passing interest in politics. 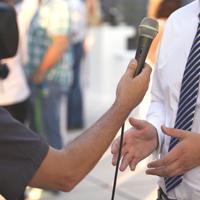 Where Is Media Hunger for Government Transparency?

According to the most recent data available from Statistics Canada, a plurality of the capital regional district's labour force works in public administration, while a majority between the ages of 25 and 64 has some form of higher education. It's also the seat of government for perhaps the most politically active province in Confederation.

But, even though it was an election year, none of the 25 most read stories in 2013 on the Times Colonist's website had anything to do with politics. Instead, it was stories about soy sauce substitutes, imported fish and a cougar swimming off the coast of Vancouver Island that made that list.

It's a phenomenon that appears to have been repeated to the same or somewhat lesser degree at major news organizations across the country. And that should be a concern for both journalists and Canadians alike.

In Montreal, for example, the 10 most read Gazette stories on the newspaper's website covered everything from restaurant etiquette to boil water advisories. But stories about the province's public life -- including a corruption inquiry and the government's controversial Charter of Quebec Values -- were nowhere to be found.

Even The Globe and Mail's online readers showed comparatively little interest in the corridors of power -- unless those wandering them were intoxicated.

Stories about Toronto Mayor Rob Ford's alleged drug video and his family's past ties to the illegal drug trade made the paper's top 10 most read list. And so did a column claiming many indigenous communities are "hungering for a return to a more separate existence."

But the remaining stories on that list -- which included reports on whether green coffee bean extract will help you lose weight and how Blackberry blew it -- had little to do with politics.

A nation tuned out

For example, during the Canadian Election Study's post-2011 campaign survey, respondents were asked how often they discussed news and politics.

Over 32 per cent said they don't generally talk about those subjects with either their friends or family.

Almost 83 per cent said they don't generally exchange political news and ideas on the Internet.

And a comparable number of respondents said they have never joined a federal political party.

Of course, there may be some journalists who say this has nothing to do with them. And there are others who will say journalists should just give the people even more of what they apparently want, as defined by these lists.

But this "see no evil, do no good" attitude could have ramifications for the rights, privileges and freedoms journalists exercise on behalf of their audience and the public.

The most defensible rationale for such access and protection doesn't come from the news media's power to communicate with the masses -- a power the Internet is making more diffuse by the day.

Instead, it comes from the supposed content of those communications, which are meant to discuss public policy and allow for the criticism of government -- the very bulwark of liberty.

But if the masses are not consuming such content, the rationale for and existence of journalistic access and protection may be undermined -- compromising the news media's capacity to fulfill its societal responsibilities.

Indeed, we are already arguably seeing that happen as public officials, acting on the advice of political and communications advisors, increasingly circumvent or ignore journalists.

That puts accountability, transparency and, by extension, democracy at risk.

Get to the bottom of apathy

As such, it is incumbent on journalists to figure out why Canadians aren't consuming more political news and what the news media can do about it.

Perhaps it has to do with how journalists cover politics -- all sound and fury but too often failing to demonstrate it means something?

Perhaps it has to do with how journalists can't cover politics, restricted by our limited access to public records and officials?

Perhaps it has to do with how little influence Canadians have over our political system, decreasing their need and desire for news about it?

Perhaps Canadians just aren't very interested in influencing our political system, being subjects of a culture that has historically favoured deference over rebellion?

Or perhaps it's something else entirely?

Regardless, these are questions journalists and Canadians should be asking, answering and, most importantly, doing something about.

Because when a cougar swimming in the ocean bests news about the political future of an entire province, something is amiss in the newsrooms, living rooms and legislatures of this nation.