Spending time in the backyard with his son a few years ago, Joel Bakan asked the boy what he was doing online. His son, 11 at the time, said he'd discovered a "really cool site" named Addictinggames.com. That moment launched Bakan on a journey of virtual discovery. As he browsed websites oriented for kids he found games like Whack Your Soul Mate and Boneless Girl. The former entices a player to choose their own murder scenario between a cartoon couple. The latter features an unconscious, scantily-clad young woman that a player whips and pulls mercilessly across the screen. 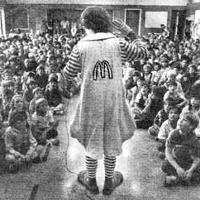 Do Corporations in Classrooms Hurt Kids?

Bakan found other gaming hubs, where young users adopt and care for online pets, and where the rules of the game spell virtual destruction of the pets should a subscription renewal go unpaid. And then there's Honesty Box, a Facebook app that has self-conscious teens pay for the privilege of hearing what their mean friends anonymously post about them online. ("If you truly want honesty, don't ask questions you don't really want the answer to," a recent Honesty Box post on the site advises.)

"The thought I had at the time was, a hundred years from now, we'll go to some museum of natural history and ask what kids were playing with in this culture. And you know, they're playing Whack Your Soul Mate and Boneless Girl," says Bakan, who is raising two teenagers. "What is that going to say about us as a society?

"It convinced me, I need to write this book."

If you've been in a bookstore, rented a movie, or picked up a newspaper since 2004, you've probably heard of The Corporation. Bakan's book and subsequent documentary argued that if a corporation was human, it would be a certifiable psychopath.

And it was a massive hit. The doc won Sundance awards, owned the festival circuit, and garnered a review in the Economist magazine.

With a similarly big scope, Bakan's new book, Childhood Under Siege: How Big Business Targets Children, chronicles how the erosion of government protections for children has allowed corporations and marketers to increasingly target them -- with chilling effects.

Though the book tends to focus on the U.S., Bakan, a UBC law professor who lives in Vancouver's leafy Point Grey neighbourhood, argues that Canadian children are affected too. In a Globe and Mail opinion piece published earlier this month, he wrote that B.C. has "the most astonishingly neglectful child labour laws in North America, indeed in the world."

Bold words. Childhood Under Siege continues in that vein, chronicling the various ways corporate structures target children by playing with their emotions and keying off their vulnerabilities and idealism to make a profit. The result, Bakan details, is some scary business.

Kids who spend hours online in seductive fantasy cyberworlds and social media networks that feed teenage narcissism are bombarded by web marketing. Aggressively targeted by clowns with red hair (McDonald's) and hipster icons (Starbucks), they nag their parents for crappy fast food and sugary drinks. And Big Pharma, with its smothering of negative scientific studies and co-option of medical professionals, has created a culture where drugs solve all -- and where children label themselves ADHD before even seeing a doctor.

VANCOUVER LAUNCH OF 'CHILDHOOD UNDER SIEGE'

Tack on the tendency of corporations to pollute the environment with toxins, exploit child labour, and cause market-driven reforms in public education, and you have Bakan's basic laundry list of concerns.

If it sounds alarmist, it's meant to. This is Bakan's "tornado warning."

"It's my job as a social critic to be alarming if there's reason to be alarming," he says. "I think that we are coddled into a sense of false comfort by the absolute hegemony of corporate spin on all of these issues."

So, is the alarm being heard? The book's just hit the shelves, and already has four translation deals, Bakan says. He's also had a couple of pieces in the New York Times.

But not all the reviews have been positive. In the Globe and Mail, reviewer Elisabeth Young-Bruehl argued that Bakan's pitting of parents against corporations is too simplistic.

She wrote: "In the Good Parents/Bad Corporations fantasy with which Bakan operates, the Good are rendered powerless by the Bad, and the Bad is unstoppable because it is not made up of any real people who have real choices and real responsibility toward children and toward the future children represent. And there are no other adults: no citizens, no legislators, no children’s-rights advocates. No political process. In Bakan's world, no group of legislators or policy-makers would ever gather to read Childhood Under Siege and use it to try to protect children from the anti-child practices it investigates so well."

Bakan quickly wrote a rebuttal calling the review "absolutely bizarre," and arguing that the book illustrates a number of legislative policies and initiatives that could address the corporate targeting of children.

He adds to those proposals in our interview, saying that tightly focused government regulations, enhanced media literacy in schools, and talking to kids about the influence of marketing and marketers -- the people who work to make them want the things they want -- will help.

"My main message is, wouldn't it be better to, as a society, try to lessen the scope of the problem, then to simply allow the problem to run rampant and leave it to parents to try and explain these things to their kids?"

So how do you tell your kids that the big, bad corporation is after them? Or how does Bakan tell his?

"I tell them, 'Those are very carefully crafted images by professional image crafters that are designed to make you want that product. [The people] who are putting that on TV or the web, they're trying to get you to think that if you don't have that, you're a loser, and if you do, your life would be wonderful. You're being manipulated, hypnotized into thinking that.'"

Bakan's son did recently quit Facebook, though dad is quick to say that it was entirely his son's choice to do so. "He said, 'This is messing me up. It's a sinkhole for me.'"

Still, even world-renowned experts occasionally have trouble getting through to their own kids about what they study. While interviewing environmental health expert Bruce Lanphear for the book -- who began listing all the harmful toxins children are exposed to in the environment -- Bakan asked Lanphear how he warns his own kids about toxins.

"(Lanphear) said, 'I can't. I tell my girls they shouldn't put nail polish on because of this and that, and they roll their eyes at me.' So here's the world's leading expert on this issue, and he can't effectively protect his kids."

Many parents don't even know what they're up against, he says. "When we get into the online stuff, it gets very, very tricky. I don't have any easy answers."

As a parent, Bakan says it's about compromises. "So much stuff is being pushed at them, you have to say yes to some things," he says. "Yes, you can go on Facebook, but I don't want you playing GTA4 and killing prostitutes."

Destined for the screen

As with The Corporation, Childhood Under Siege will hit the big screen -- "a year and a half, two years from now," in Bakan's estimation. Calgary-based filmmaker Gary Burns, who recently released The Future is Now with the National Film Board, is signed on to direct.

Bakan says it will be an opportunity to hear from kids themselves. "I think in the film, the relationship between the protagonist kids and the antagonist corporations, and the supporting characters of government and parents. . . will be a bit more balanced," he says.

And after that? Is there a hint of the next Corporation spinoff?

"I'm interested in taking on the issue of democracy," he says.

"Yeah. It's kind of the issue that is swirling around all the other stuff that I look at," he says. "We elect governments, and those governments are supposed to respond to protecting the public interest. That's the whole idea of a democracy. Somehow, that got lost."