Move aside, VPD: Facebook is not just a helper in bringing Vancouver rioters to justice, but is becoming a virtual courtroom as well. 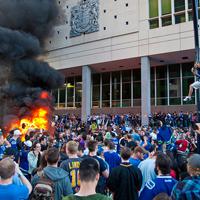 Since the Stanley Cup riot, numerous pages such as Facebook riot pics have posted photos of people smashing windows, tipping over urinals and brawling with police. There has also been a move for identification and public shaming of the people who were shown taking part in the mayhem.

Brock Anton is a Facebook user who made national headlines for posting incriminating evidence of himself on burning cars during the riots. There is now a public Facebook page devoted to shaming him -- there for strangers to post hateful messages about his criminal acts. Thousands of Facebook users, ranging from senior citizens to high school students, have left taunts and insults on the page. Nathan Kotylak, a water polo all-star athlete with a scholarship to the University of Calgary, was attacked on Facebook after photos emerged of him lighting a police cruiser on fire.

Friends and defenders of the rioters pleaded with the administrator to take the page down yesterday, only to be bombarded with hateful attacks themselves -- within hours, they took down their posts, while the hate posts continued to stream in.

"Over the last 10 years, I've been thinking Orwell got it wrong," said Peter Chow-White, an SFU communications professor specializing in social media. "There's not going to be this oppressive Big Brother eye watching us. We give out the minutiae of our lives for free on Twitter and Facebook."

While photographs and video footage posted by the public (and often by the perpetrators themselves) have been instrumental in bringing them to justice, Chow-White said that tools like Facebook risk putting ordinary people on the same playing field as powerful politicians and celebrities whose lives are built around public exposure.

"I've seen at least one report of someone being fired already because they had pictures at the riot. With social media, there's guilt by association. What's removed is any sort of due process. For people to be fired right away because they saw you in a photo... what they were doing was not done in the workplace."

Alexandra Samuel, social media director at Emily Carr University, wrote a blog post in the Harvard Business Review website about the disturbing trend of citizen surveillance, with people on Twitter and Facebook calling on the public to identify criminals in the riot.

"I was deeply disturbed to see the community of social media enthusiasts embrace a new role: not in observation, not in citizen journalism, but in citizen surveillance," she wrote.

She said that while documenting with photographs and video are an integral part of social media, citizens cross the line when they begin to post footage with the explicit intention of identifying people.

Samuel wrote that while it may be constructive to identify someone involved in car burnings during the riots, there are many cases where social media is used wrongfully:

"I am much less comfortable when I think about other ways that crowdsourced surveillance has been or might be put to use: By pro-life demonstrators posting photos of women going into clinics that provide abortions. By informants in authoritarian states tracking posts and tweets critical of the government. By employers that scan Facebook to see which of their employees have been tagged in photos on Pride Day or 4/20."

The Vancouver riots, Samuel said, show how social media can be used not just to create a sense of community and public safety, but also to destroy it.

"What social media is for -- or what it can be for, if we use it to its fullest potential -- is to create community. And there is nothing that will erode community faster, both online and off, than creating a society of mutual surveillance."

What are the options?

Given how social media is integrated into people's lives, many of the individuals identified during the Vancouver riots will not have the option of simply erasing their Facebook and Twitter accounts in order to avoid public humiliation.

These tools are so much a part of daily life that people can no longer separate their private lives from their public ones online.

"Increasingly, for the younger generation, not having a life online is similar to not having a social life, period," said Chow-White. He said that over the last decade, notions of privacy have been eroded through social media, and that the Vancouver riots show the effects of living in a world in which everyone is a potential watchdog.

"What we're seeing is the cost and consequences of that -- a life being lived in public."