In 2008, Corey Vidal created and posted this tribute to John Williams, the composer of the iconic Star Wars soundtrack. No surprise, it quickly went viral with more than 6 million hits. In January 2009, the Warner Music Group, which owns the rights to the score, had YouTube remove the video by claiming an infringement of intellectual property rights. 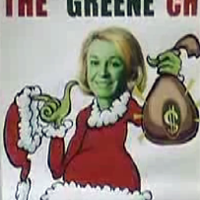 Some digital rights groups, however, are concerned that some are using those same intellectual property rights as a way of removing online content they find objectionable. To understand this, we need to talk about giant flying penises.

Anshe Chung became an Internet star when she allegedly became the first person to make a million dollars from her exploits in Second Life, an online reality simulation. She became an Internet legend when her avatar was attacked by a flock of giant flying digital penises during an online interview with CNET. The resulting video went viral.

In response, her husband filed a complaint with YouTube claiming an infringement of intellectual property rights and -- to the dismay of amused viewers and free-speech advocates -- the video was deleted.

This sort of video censorship has long been common on the Net. Under certain legislation any third-party can launch a complaint and historically, users who have had their content removed at the requests of third parties have had little recourse. That may now be changing. The launch of a campaign called the "Takedown Hall of Shame" aims to publicly out high-profile businesses and groups engaging in censorship in the digital world.

Launched by the Electronic Frontier Foundation (EFF) -- an American tech-advocacy group known for defending free speech on the Internet -- the Hall of Shame features what they consider the worst of the worst censor-happy sinners. (Dis)honourees include National Public Radio for trying to remove a portion of an All Things Considered broadcast used in a video ad criticizing same-sex marriage, and NBC for requesting the removal of an Obama campaign video made to encourage supporters to get out and vote. Also included is Warner Music Group, which ordered the take down of video mashups incorporating its songs, like the John Williams tribute above.

EFF claims many of those singled out improperly used the U.S. Digital Millennium Copyright Act (DMCA) -- an act designed to allow intellectual property rights-holders to direct the prompt takedown of content that allegedly infringes their rights -- to facilitate the removal of videos that offend their sensibilities. When videos of Anshe's penis attack first popped up a couple of years ago, it was the DMCA to which her husband turned to facilitate their takedown. However, "Mr. Chung" ultimately came to realize the error of his ways: he admitted his use of the DMCA was improper and issued an apology to the online community.

In a case earlier this month, Boing Boing's web host and the Photoshop Disaster blog's ISP were delivered DMCA threats after reposting a Ralph Lauren ad featuring a model whose image was so obscenely 'shopped, her head was larger than her waist. Although the ad can still be viewed on Boing Boing, the threat -- despite all the media attention and offers of free legal advice -- was enough to spook Photoshop Disaster's ISP to remove the offending picture.

Whether or not the existence of the Hall of Shame site alone is enough to discourage attempts to stifle free speech using copyright and trademark law, websites like those of the EFF and the Canadian Internet Policy and Public Interest Clinic remain powerful weapons in the arsenals of video producers, viewers and free-speech advocates: in addition to its list of honourees, the EFF's site also provides "A Guide To YouTube Removals" and a how-to on "Avoiding Gripes About Your Gripe or Parody Site" for content producers looking to stay out of trouble.