Lady mags are in trouble. Usually, the mags gorge on ads for their September issues, often inches thick, and by far the biggest of the year. The fall issues' fat revenues, bursting at the seams, usually carry them through the lean months after Christmas. But plummeting ad sales combined with lower circulation rates mean quite a few won't have enough reserves to make it through the hibernation. 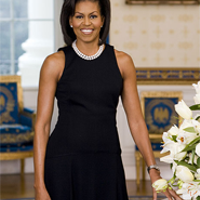 The Right to Bare Arms

Big surprise. Lady mags are dinosaurs. While many in the industry are pointing bejeweled fingers at the decline of (old) media (of which lady mags are pillars), the recession and corresponding lack of interest in over-consuming, and other corporate hoo-ha, lady mags' decreasing power is much because their former readers just want to sit at a different lunch table now.

And since fashion mags aren't the queens of the hallways anymore, it's no surprise that many of those former queens are trying to give themselves a quick makeover, to show they're not with the drowning clique.

Like Liz Jones, a former lady mag editrix who this week tries to distance herself from her old friends. She writes in The Daily Mail about why even though she sat at the helm of one of the biggies, Marie Claire, and, "personally, read Vogue for over three decades as though it were scripture," as one Salon writer quipped, she has since decided to call off the affair.

The former glossy queen says lady mags are "patronizing, fake, and pointless." No kidding. But she says it wasn't always this way. She says the main problem is that with circulation down, magazines have become too reliant on advertisers. So in order to secure precious ad dollars in the competitive environment, they write increasingly sycophantic editorials about (often untested) beauty products and (overpriced, irrelevant) clothing labels, and have therefore lost credibility with their readers.

Her conclusion is that "the magazines, our magazines, have got to start being on our side again."

But that's not the main way lady mags haven't been on "our" side (if you agree Jones is with "us").

I'm pretty. You're ugly. Buy this.

A former model wrote a poignant essay this week about why she just quit the industry. Jenna Sauers writes, "I often reflected on the fact that studies show that women, after looking at fashion magazines -- full of pictures of girls very much like me, sometimes even pictures of me -- feel bad about themselves. I also often wondered why it is, given this fact, that we buy the magazines again next month."

The glossies have always been about making their readers feel bad. The fix, of course, is buying the stuff the mags are pushing.

There's lots written about how the recession has taken fashion off the radar. But the women I know haven't lost interest in clothes or the politics of appearance -- quite the opposite. Sure, it's a love-hate relationship, and full of problems. But while it would make the morning routine easier, most women I know aren't about to start wearing burlap sacks.

Fashion, for better or worse, is a mainstay of female culture. And while fur and jewels and over-consumption are very much out of vogue, it's hard to imagine that the culture of clothing will become extinct anytime soon. In fact, lately I've read even more articles about style and fashion than in the past (Michelle Obama alone has inspired thousands of pieces), and seen style and fashion blogs proliferate.

Jones herself points out that women are now turning to blogs partly because blogs offer critical information, not tied to advertising dollars. And the many other fashion blog readers I know like that blogs are more accessible, tend to consider the readers friends instead of sheep to be lead, and feature photos of real people on the street or of the blogger him or herself.

The women I talk to aren't tired of fashion, just tired of the fashion glossies and their prettier-than-thou bullying, and tuning into other sources instead.

The queen is dead. Long live the queen.